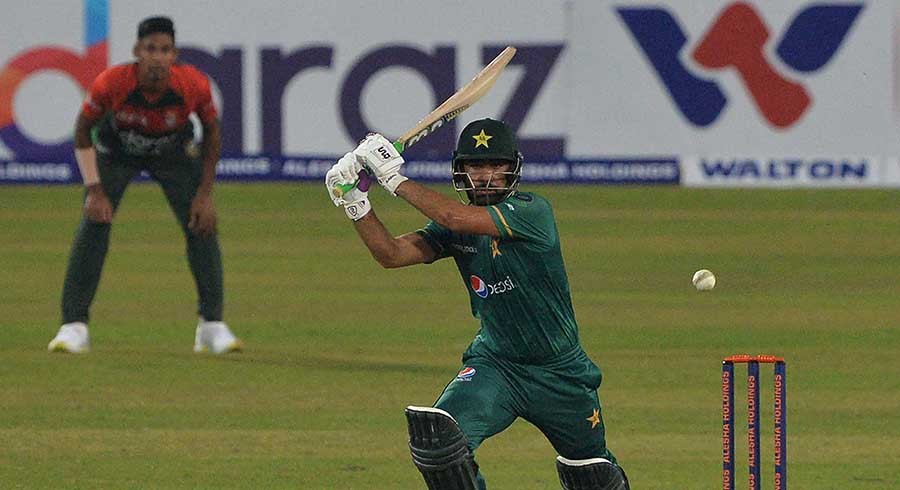 Shadab Khan's cameo innings of 21 off 10 deliveries cruised the visitors to chase down the target in the last over of the game with Mohammad Nawaz being unbeaten on 18 off 8 balls.

Pakistan lost both the openers Mohammad Rizwan and skipper Babar Azam early in response to Bangladesh’s 128 run target. Rizwan was castled by Mustafizur Rahman on 11 and Babar was removed with an inside edge by Taskin Ahmed.

The visitors lost four batters in the first six overs ending their first powerplay with 24-4.

While, Haider Ali and veteran all-rounder Shoaib Malik returned for ducks, Shoaib was runout in a comical way when he was strolling outside crease the keeper threw the ball onto the stumps which got him out.

Then Fakhar Zaman took charge and added 56 runs with Khushdil Shah for the fifth wicket stand which propelled Pakistan to bounce back in the match.

Fakhar hit 34 off 36 balls with four fours while Shah smashed 34 off 35 balls with three fours and a six.

Earlier, Pace bowler Hasan Ali picked up 3-22 as Pakistan restricted Bangladesh to 127-7 in the first Twenty20 international of a three-match series in Dhaka on Friday.

Opting to bat first, Bangladesh got off to a shaky start, losing their first three wickets for 15 runs, before Afif Hossain steadied the hosts with 36 off 34 balls.

Nurul Hasan made 28 off 22 batting at four down while Mahedi Hasan played a cameo of not out 30 off just 20 balls to take the score past 120-run mark.

Openers Mohammad Naim and Saif Hasan both scored one run each while one-down Najmul Hossain got out for 7.