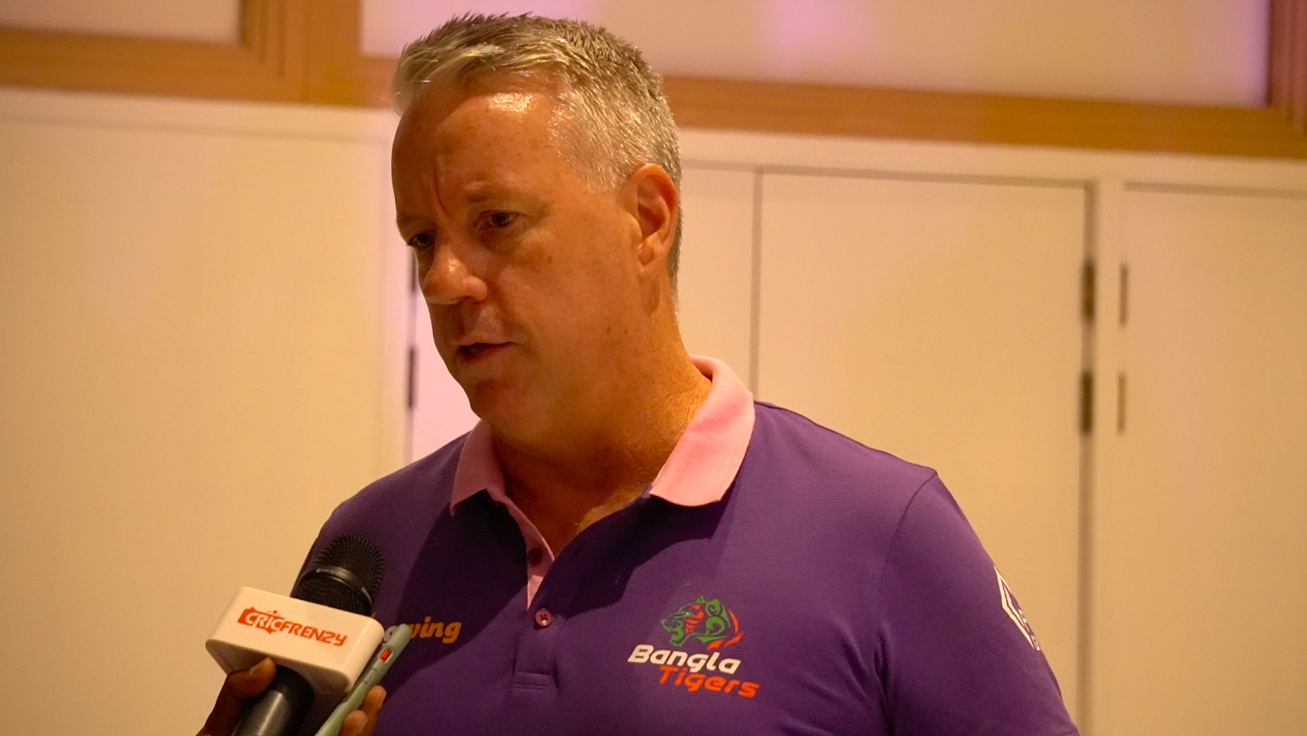 After the 2011 World Cup, former Australia cricketer Stuart Law was assigned to be the head coach of Bangladesh national team for two years, but after working for one year, he had left his job due to family reasons. After 5 years he returned to Bangladesh. Before the 2016 Youth World Cup, he took charge as an advisor to the Bangladesh U-19 team.

What would Law do if he was offered to take charge of Bangladesh cricket again? Law is currently the head coach of the Bangla Tigers in Abu Dhabi T-10 League.

Tigers’ former coach spoke about his plans and other topics during an interview in Dubai with Cricfrenzy's Mohammad Abid Alam. The excerpts are below:

Cricfrenzy: How do you feel about coaching in a different format (T-10) for the first time or what was the experience like so far?

Stuart Law: Experience is not that much so far. Because I just came. I will be going to Abu Dhabi soon, there will be a bio-bubble. Only then will I understand what is really happening. I will also talk to the players and find out about them. The next few days will be spent learning about the players. But I am eager to face this challenge.

CF: You just said that you have to be in the bio-bubble zone. Staying in this bubble becomes difficult for anyone. How difficult is it for a player to actually adapt to all this and perform at 22 yards?

Law: Speaking of bio-bubble, this will be the first for me. This experience has never happened to me before. However, there are many players in my team who have been in the bubble. I have to discuss with them, I have to understand what is actually happening there. Their advice will help me to adjust to the bubble. And we have a lot of good players from all over the world. Even if the time is short, we will talk to everyone, get to know each other ... Familiarity will increase. You can learn about different cultures. In addition, those who are young will be able to gain knowledge from experienced campaigners.

CF: This is the first time you have been associated with this format. How do you see this format for the progress of cricket?

Law: This is the first for me as a coach but I watched the game in this format on TV. Now I can watch it closely, I can understand it, I can review it. A closer look may change a lot of ideas about how the game run. And since it's a different format, it's also an opportunity for me to do something new. How a cricket match ends in 90 minutes I can understand now. You can say that this tournament can be considered as a football competitor. Watching a short game will probably attract a lot of people. But if this format becomes successful then it is good for us. Suppose this format can include in the Commonwealth Games or the Olympics.

CF: Now let me focus on international cricket. How do you rate Bangladesh's performance in this World Cup? What is the way out from this bad time?

Law: Look, it could happen on the field. Who will win and who will lose in cricket can never be assumed. And it is more difficult to say in T20 format. You see, even the best team on paper loses on the field. Bangladesh got many chances to win matches in this World Cup but they could not take these big chances properly. You don't always get much of a chance against a big team, but you have to take it, whenever you get it. But I don't think Bangladesh needs to go that deep. Sometimes you have to understand cricket too, maybe God didn't look at you that way this time.

CF: Before coming here in Dubai, Bangladesh did not have the wicket here as similar in Dhaka. Despite winning the series against New Zealand-Australia, they have not won a single match in the Super12s. You were with the Bangladesh team, you saw everything up close. What is the main reason for the collapse in the World Cup, the wickets or any other reason?

Law: When you come to play a tournament like this [World Cup], you will not get wickets like home. Many teams come here to play, so the ICC makes for all the teams. So keeping these in mind before such tournaments, it is good for the team to play as much as possible on such wickets. So that everyone can understand their role and come to such a tournament and play good cricket.

CF: Bangladesh Cricket board is in talks to appoint a new coach. You've worked before, you know everything. What would you do if they offer you again?

Law: Look, if the proposal actually comes, I will consider it quite seriously. I won't look what I'll get out of it, but the opportunity to work with all the familiar people will come again. A few years ago I also worked with the youth team of Bangladesh, they are very hardworking and interested in playing well. If there is any such proposal from BCB, I will sit with the family and discuss it. After discussion, I might give positive feedback.

CF: So can I say that you are interested in becoming the coach of Bangladesh or take the matter on a positive note?

Law: I am a positive person. The challenge is waiting for me. And now that I'm not involved with anything that much, I might have the opportunity to work in different places.

CF: Which is the most beautiful and pleasant memory you had while coaching Bangladesh?

Law: In a word, 2012 Asia Cup final. We should have won that. We’ve won against India-Sri Lanka. Even Pakistan should have lost twice. It would have been a wonderful memory. But I still hear everyone in Bangladesh talk about it. Sounds great.

CF: How much Bangladesh team have changed in these nine years from 2012 to 2021 or what changes have you noticed?

Law: The change I have seen mainly is among the players. They play more seriously now. Stayed fitter and the whole team seemed stronger. Despite this World Cup performance, they are performing regularly on the big stage. They have taken many good steps to move forward. Now it's time to move on further. Many young cricketers are coming up and they have to be taken care of. Hopefully, they will get better if they get proper nursing.

CF: Recently a new discussion has come up that there is no power hitter in the Bangladesh team. How to make a power hitter or find a player like that?

Law: It won’t actually happen overnight. Not that you went to the gym and get it. It has to be planned in the long run. Proper diet, proper training and proper physical care are required. Many players have it naturally and many have not. Maybe Bangladesh will have to find a different path. You may not be able to power hit like the West Indies-South African cricketers but you have to get them out the other way. Because they are very strong. If I am asked to speak, I will say to consider Mahela Jayawardene. Small man but able to run all over the field and believe in timing.