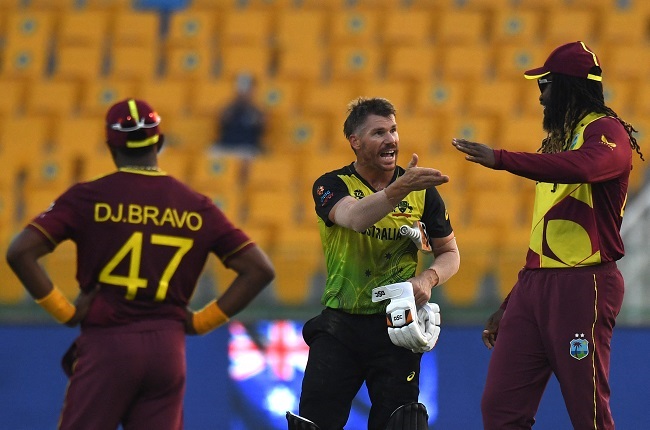 Opener David Warner smashed an unbeaten 89 as Australia hammered West Indies by eight wickets to edge closer to the semi-finals in the Twenty20 World Cup on Saturday.

Chasing 158 for victory, Australia rode on a 124-run second-wicket stand between Warner and Mitchell Marsh to romp home in 16.2 overs in Abu Dhabi and go level with Group 1 leaders England on eight points.

Marsh, who hit 53 of 32 balls, got out to Chris Gayle who celebrated the wicket in what was his likely swansong in West Indies colours.

Earlier Josh Hazlewood took four wickets to keep West Indies down to 157 for seven despite skipper Kieron Pollard's 44 in the Super 12 clash.

South Africa play England, who are all but through to the final four, in the evening match and the result will decide the two semi-finalists this group.

South Africa need a dominant win to improve their run-rate and edge out Australia. England can only miss out on the final four if they lose heavily.

Reigning champions West Indies failed to give a winning farewell to Dwayne Bravo, who played his last international.

Australia gave Bravo and Gayle a guard of honour after Warner hit the winning runs.

Pollard rescued his side, who failed to defend their title after a loss to Sri Lanka took them out of the semi-final race, from 91-5 with his 31-ball knock and a key partnership of 35 with Bravo.

Bravo, who remains the leading wicket-taker in T20 matches with 553 scalps, scored 10 and walked back to claps and hugs.

Andre Russell finished off the innings with two sixes off Mitchell Starc in his unbeaten 18 off seven balls.

Openers Evin Lewis and Gayle started in attacking mode hitting the Australian pace bowlers to all parts of the ground in an opening stand of 30 off 14 balls.

Gayle hit two sixes, including one off Pat Cummins, before the bowler got the veteran big-hitter to chop a delivery on to the stumps.

The 42-year-old West Indies great made 15 off nine balls and walked back to a standing ovation from his teammates.

Hazlewood came back with a bang with twin strikes as he sent back Nicholas Pooran and Roston Chase, bowled for nought, in the space of three deliveries, to leave the West Indies teetering at 35-3.

The left-handed pair of Lewis and Shimron Hetmyer, who made 27, fought back with a partnership of 35 but Adam Zampa broke the stand with his leg spin.

In reply Warner came attacking and unsettled the West Indian attack with boundaries all around the park despite losing opening partner Aaron Finch for nine.

Marsh was equally punishing of the bowlers as he hit five fours and two sixes in his fifth T20 fifty.