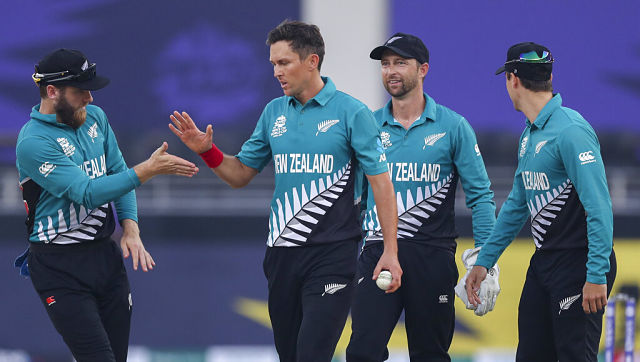 Glenn Phillips and Jimmy Neesham plundered 67 runs off the last four overs as New Zealand made 163-4 after being put into bat.

New Zealand have six points, two ahead of Afghanistan and four in front of India who must win both their remaining games, and improve their run rate, to have any chance of making the semi-finals.

Pakistan have already booked their place in the last four from Group 2.

"We knew what to expect here, it was a real scrap," said New Zealand captain Kane Williamson.

Phillips hit an undefeated 39 off 21 balls with one four and three sixes while man-of-the-match Neesham made 35 from 23 deliveries with a boundary and two sixes.

But Namibia lost their discipline with 21 coming off the 18th over bowled by David Wiese and 18 taken from a wild 10-ball final over from JJ Smit.

Namibia had limited New Zealand to 62-2 at the halfway point after winning the toss and electing to field.

One of the early wickets to fall was opener Martin Guptill who had smashed 93 in the 16-run win over Scotland last time out.

But experienced seamers Tim Southee (2-15) and Trent Boult (2-20) applied the brakes as Namibia were only able to add 55 more runs off the last 10 overs.

"Afghanistan are a really, really strong side," added Williamson of their next opponents who are still in the hunt for a semi-final place.

"They have done so well in this tournament and have got match-winners throughout their side. So we are looking forward to playing them."

Namibia have one win in the Super 12s courtesy of beating Scotland.

They bring the curtain down on the group stage on Monday when they tackle India.

"We did well for 15-16 overs in the middle today but the death overs didn't go our way," said captain Gerhard Erasmus.

"We have got one more game to nail against India.

The Black Caps, who face fellow semi-final hopefuls Afghanistan on Sunday, were struggling at 96-4 off 16 overs after being put into bat by Namibia, the lowest-ranked team in the tournament.