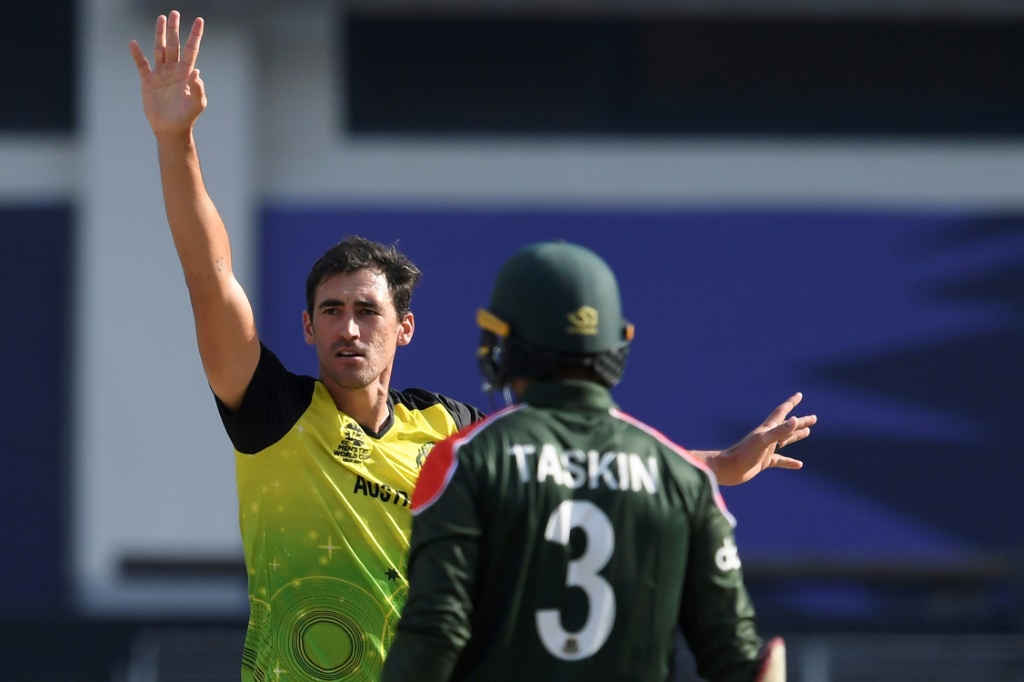 Australia skipper Aaron Finch on Friday called Mitchell Starc their go-to bowler as they take on a wounded West Indies in their decisive final group match of the Twenty20 World Cup.

Australia demolished Bangladesh by eight wickets on Thursday to move ahead of South Africa on net run-rate and a win in Abu Dhabi on Saturday would keep their semi-final hopes in their own hands.

In contrast, West Indies have failed to defend their T20 title after going down to Sri Lanka for their third loss in four matches.

But the outgoing holders outclassed Australia 4-1 in a bilateral T20 series in July and Finch is wary.

"West Indies is such a dangerous side, we saw that when we played them," he said.

"Obviously with them being out of the competition now they've got nothing to lose, which can also be a really dangerous spot."

Australia lost to rivals England but the Aussie bowlers, led by Starc, bundled out Bangladesh for a paltry 73, a total their batsmen overhauled in 6.2 overs.

Starc led the rout after he bowled Liton Das for nought and later got skipper Mahmudullah Riyad caught behind. Starc returned figures of 2-21 with his express pace.

"His record in all formats of the game is unbelievable, but particularly in T20 cricket, he is someone who has got so many skills," Finch said of his pace spearhead.

"The ability to take wickets all through the innings with the new ball, at the death in particular, he is as good as anyone in the world.

"So absolutely he is a strike weapon that we love to use any stage we feel we can exploit someone or there is a little weakness, or you want to keep pressing through the middle overs. He is the one you turn to most times."

Adam Zampa also stood out with career-best figures of 5-19 with his leg spin as Australia bowled out Bangladesh in 15 overs.

Finch said Zampa will always be a bowler who puts the opposition under pressure.

"The guy is a huge weapon. He is someone who has been so consistent over the last couple of years in both white-ball formats of the game," Finch said of the New South Wales spinner.

Australia are tied in their World Cup group with South Africa -- who play an unbeaten England on Saturday -- on six points as both teams go into their final match jostling for a place in the final four.