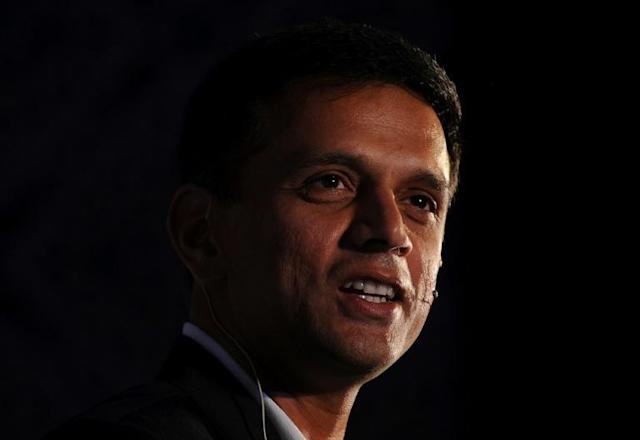 Rahul Dravid became a television sensation this year in an advert in which the out-of-control cricket hero is seen hitting a car with a bat in the thick of one of India's notorious traffic jams.

In reality, the 48-year-old has one of the calmest heads in cricket and will he need it to coach India after their troubled T20 World Cup.

The advert in which Dravid waves his bat out of the car window shouting "are you blind?" at other drivers has been seen and shared millions of times even after it finished its television run.

For Dravid, it is part of an attempt to put right his image as a single-minded nice guy. He knows such a reputation has risks going into such a high-pressure job as guiding India's rock star cricketers.

"I would be uncomfortable trying to be the life of the party, I have never been that," he said in one television interview.

But he added: "I guess if you get labelled as a 'good boy' or labelled as someone who does everything correctly, when you make one mistake then that gets highlighted even more."

As a batsman however, Dravid was regularly India's quiet saviour in a career in which he became known for his classical style and rock solid defence.

He scored 13,288 runs in 164 Tests, second only to the legendary Sachin Tendulkar for India and fourth overall in the world rankings.

Eschewing force and flamboyance, Dravid earned the titles 'The Wall' and 'Mr Dependable' for his string of marathon innings under intense pressure.

Exuding Zen-like calm as he walked out to the crease, his presence soothed the nerves of India's frenzied fans and excitable teammates.

Dravid was often overshadowed by the likes of Tendulkar and Sourav Ganguly, who now heads the country's cricket board, but he remained the quintessential team player.

In an epic 2001 Kolkata Test against Australia, which India won after following on 274 runs behind, Dravid's 180 was beaten by VVS Laxman's 281.

But his 233 during a mammoth 835-minute stay in Australia in 2003 and a century at Lord's towards the end of his career made him an Indian great.

He also hit 270 against Pakistan in 2004 when he batted for 740 minutes to help India win a crunch series.

In his autobiography, "Standing My Ground", former Australian opener Matthew Hayden compared Dravid to Bjorn Borg, the Swedish tennis ace who was also famed for giving away little emotion.

"Others might have quickened the pulse of spectators more, but with his textbook purity and great concentration Dravid was still absorbing to watch. In my era, he was the Bjorn Borg of cricket, absolute ice under pressure," Hayden wrote.

Incidents of Dravid losing his cool are so rare that fans still pore over the occasion when he threw his cap to the ground in disgust after Rajasthan Royals lost an Indian Premier League match.

And he has remained a dignified presence, focusing on the job at hand rather than seeking clickbait headlines.

"When I don't do well, it (the headline) will be like 'cracks in the wall', 'another brick in the wall crumbles'," said Dravid in a recent interview.

Dravid takes charge of a side demoralised by failing -- barring a miracle -- to reach the T20 World Cup semi-finals when they had been a favourite to lift the trophy in Virat Kohli's final campaign as T20 captain.

Dravid has already groomed rising stars in the India A side and at the National Cricket Academy since his retirement in 2012.

"I always tell the boys not to show their emotions too much," he said when asked about his style. It is a line he may need to repeat.