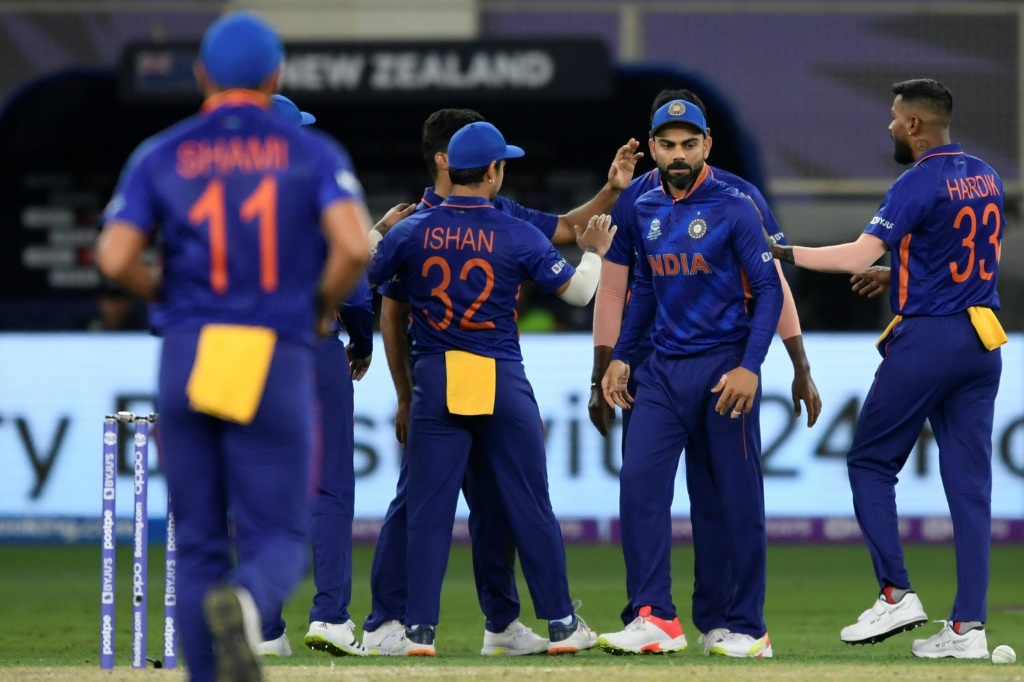 Virat Kohli's India started the Twenty20 World Cup as favourites but their semi-final hopes are hanging by a thread after two losses, the latest an eight-wicket defeat to New Zealand.

India's famed batting line-up limped to a modest 110-7 against New Zealand on Sunday, a week after they managed 151-7 while facing an equally good Pakistan attack.

Top Indian batsmen including KL Rahul and Rohit Sharma have shown little application after being invited to bat first in both their outings and even though Kohli made a fighting 57 against Pakistan, the total proved insufficient.

Against New Zealand, Rahul fell to Tim Southee for 18 and Sharma -- who was dropped on nought -- was out to Ish Sodhi after making 14. Kohli managed nine off 17 balls before being caught off Sodhi's leg spin.

"Tentative with the bat, their shot selection was questionable," batting great VVS Laxman wrote on Twitter. "New Zealand bowled superbly, but India made their task easier."

India made two changes from their opening loss, including one forced, and flipped the batting line-up to accomodate Ishan Kishan as an opener against New Zealand.

But the left-hander fell to left-arm quick Trent Boult's accurate line and length while trying to go for a big shot and got caught at deep square leg.

It was the double blow by Sodhi to take down Sharma and then Kohli that set India back in their ploy to get some crucial and quick runs inside the six overs of powerplay.

Tottering at 48-4, the Indian batting survived their 20 overs but came back with an apparent fallen spirit as New Zealand overhauled the modest target with 33 balls to spare.

Former India captain Sunil Gavaskar said: "I don't know if it is a fear of failure but I know that whatever changes they made to the batting order today did not work."

"Talent is one thing... You can do really well in bilateral (series) but when it comes to these kinds of tournaments, this is when you have to stand up and perform," he told the ESPNCricinfo website.

"It's been a trend, it's been happening at most ICC (International Cricket Council) tournaments."

MS Dhoni, now with the team as a mentor, led India to the T20 World Cup crown in 2007 and then lifted the 50-over World Cup four years later.

Kohli, who will step down as T20 captain after this tournament, has taken the team to historic Test triumphs in Australia and England.

But he has failed to win India a World Cup title and India lost to New Zealand in the semi-finals of the 2019 ODI World Cup. They also bowed out in the final four of the previous T20 World Cup, in 2016, under Dhoni.

There is growing belief that India falter in big-ticket tournaments, a charge that Kohli vehemently denies.

"So there's always going to be more pressure with our games and we've embraced it over the years," Kohli said.

"Everyone who plays for India has to embrace it.

"And when you cope together as a team, you overcome it, and we haven't done it these two games."