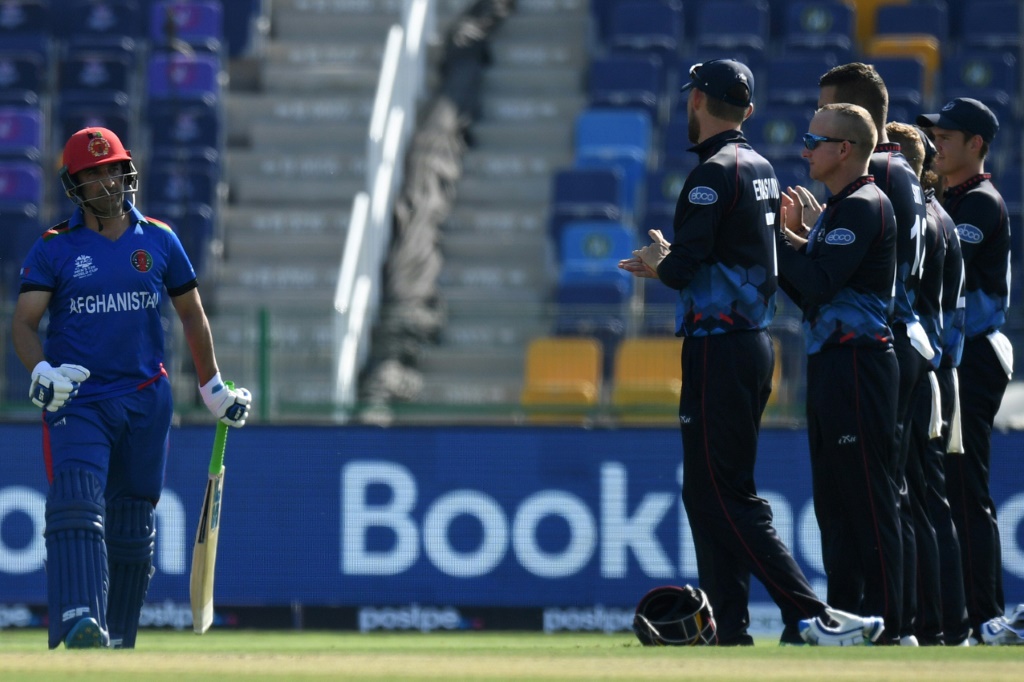 Afghanistan gained their second victory of the T20 World Cup group stage on Sunday as they thrashed Namibia by 62 runs in Abu Dhabi.

Afghanistan batted first and made 160-5 with former captain Asghar Afghan bidding farewell with 31.

They then held Namibia to 98-9 as seamers Hamid Hassan, making his first T20 international appearance in five years, and Naveen-ul-Haq both took three wickets.

Naveen was named player of the match but presented his award to Asghar, the former captain who had announced on the eve of the game that he would retire after it.

The opener hit 45 off 33 balls with two sixes. After he holed out at deep square leg off JJ Smit, opening partner Hazratullah Zazai accelerated, smashing a pair of sixes in his 33.

Play briefly halted when Asghar came in to bat and Namibia greeted him by lining up and applauding.

Asghar hit a brisk 31 off 23 balls with three fours and a six.

After Ruben Trumpelmann dismissed the 33-year-old with the last ball of the 19th over, there was another pause as Namibian players ran across the field to shake hands as he walked off.

Captain Nabi bashed an unbeaten 32 off 17 balls with one six and five fours, the last off the final ball to take his team to 160.

After the innings, an emotional Afghan discussed his decision to retire mid-tournament in an on-field interview saying he had made the choice after Friday's loss to regional rivals Pakistan.

"From the last match we were hurt too much and that is why I decided to leave the stage," he said. "It's very difficult to explain, but I had to retire."

"I wanted to give a chance to the youngsters," he said.

Asghar skippered Afghanistan over all three formats of cricket. He played six Tests, 114 one-day internationals and this was his 75th Twenty20 international in a career spread over 12 years.

The ICC sent out a press release saluting Asghar.

"Asghar has been a great ambassador of the game and played a huge part in Afghanistan's rise up the ranks in world cricket," said ICC acting chief executive Geoff Allardice.

Afghanistan had made one change to the team that lost to Pakistan, recalling Hamid Hassan for a first appearance in five years in place of injured spinner Mujeeb Ur Rahman.

The change paid off as, for once, Afghanistan's seamers did the damage.

Naveen removed both openers, Craig Williams and Michael van Lingen to reduce Namibia to 16-2. He later removed Jan Frylinck to finish with 3-26.

As Namibia struggled to recover from their poor start, Hamid dismissed captain Gerhard Erasmus with a yorker, JJ Smit and top scorer David Wiese, who made 26.

Naveen paid tribute to the departing Asghar after a win that kept Afghanistan in the hunt for a semi-final spot.

"He was the best captain Afghanistan has produced," he said. "I want to dedicate this man of the match in his last match."