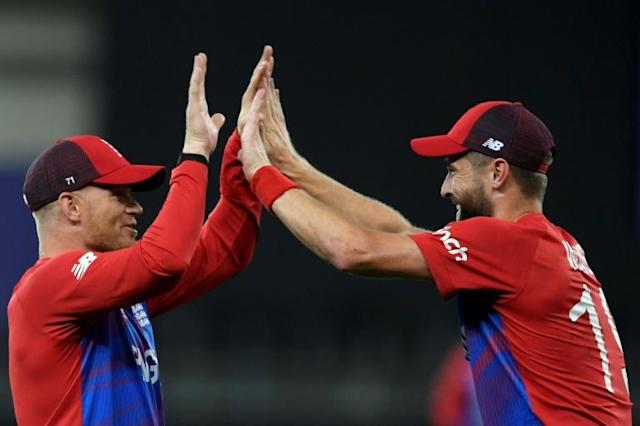 England skipper Eoin Morgan on Saturday lauded Jos Buttler and Chris Woakes as among the "world's best" after their eight-wicket thrashing of Australia to close in on a semi-final spot at the Twenty20 World Cup on Saturday.

Buttler smashed an unbeaten 71 and put on an opening stand of 66 with Jason Roy, who made 22, as England romped to their target of 126 in 11.4 overs in Dubai.

Buttler hit five fours and five sixes in his 32-ball knock to drive England to their third successive win in the Super 12 stage.

"He is obviously one of the best players in the world," Morgan said of his opening batsman. "And when he comes off like today, it's very difficult to stop him."

"He is one of the best players in the world and yet he is still trying to improve his game and get better against every single bowler that he faces and not just target a bowler that suits him," Morgan added.

Woakes and Chris Jordan shared five wickets to help bowl Australia out for 125 after England elected to field first.

Woakes sent the dangerous David Warner trudging back to the pavilion, caught behind for one, to signal his intent.

He then removed Glenn Maxwell and returned figures of 2-7 from his first three overs of excellent seam bowling and in between took a superb catch to see off Steve Smith for one.

"Woakes has been excellent," said Morgan told reporters. "He epitomised tonight that he is the best new ball bowler in white-ball cricket in the world."

"He is accurate, his pace is up, he is confident in his all-round skills. It is just not about hitting line or length or trying to get the ball to move.

"So the growth within his game is huge even though he has been right on top of it over the last four-five years."

England stay top of group 1 with six points, ahead of Australia and South Africa, who edged out Sri Lanka in the first match of the day.