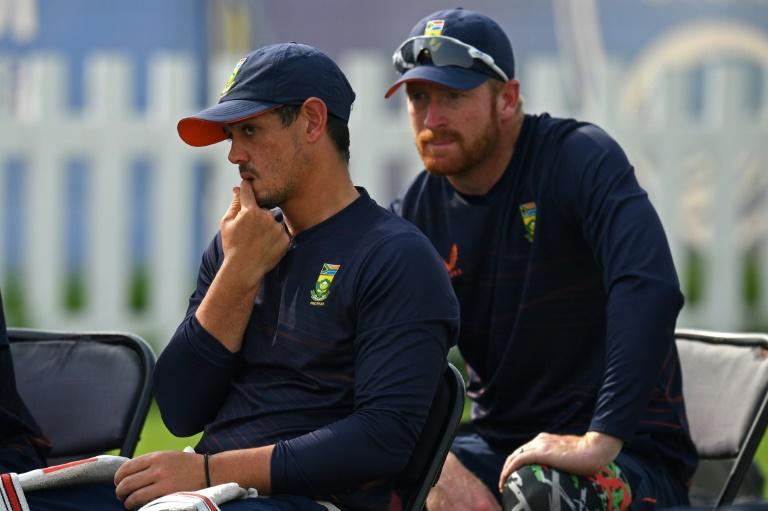 South African off-spinner Keshav Maharaj described 'take a knee' rebel Quinton de Kock as a man of "calibre" on Friday and claimed the controversy has helped the team "bond and gel even stronger".

De Kock, one of South Africa's star players at the Twenty20 World Cup, sensationally withdrew from the team for Tuesday's game against West Indies after refusing a demand from Cricket South Africa that all players take a knee at the tournament.

After a tense stand-off, the 28-year-old De Kock eventually apologised and said he would be happy to join teammates in making the anti-racism gesture.

"If me taking a knee helps to educate others, and makes the lives of others better, I am more than happy to do so," he said in a statement.

Maharaj insisted that the fall-out from the controversy, which for many highlighted once again South African sport's uncomfortable relationship with race and equality, will only make the team stronger.

"This has just made us bond and gel even stronger. You'll probably see a lot more energy than you have seen in these last two games," said Maharaj ahead of Saturday's game against Sri Lanka.

CSA ordered all their players to take a knee after pictures from their opening World Cup game against Australia showed them adopting various positions.

'Not a big thing'

Some kneeled, some kneeled with a fist raised, some stood with a clenched fist in the air while others stood but with their arms around their backs.

De Kock chose the latter gesture just as he had done during South Africa's Test series in the West Indies in June.

"I think we've had endless chats about this as a team and we respect everyone's decisions and views and opinions. For us it's not a big thing," added Maharaj.

De Kock played in the first match, a five-wicket defeat to Australia where he made just seven runs opening the batting.

It remains to be seen whether De Kock, who has made 10,000 international runs and is a former national captain, returns to the starting line-up.

"That's down to the selectors in terms of whether he starts or not tomorrow, but I know that if he does get the opportunity, he'll definitely slot back into the team," said Maharaj.

"A person of his calibre, we know what Quinny can do with the bat, and he puts match-winning knocks on."

Maharaj added: "No one is a racist within our team. We all support one another and respect everyone's cultural, religious and spiritual differences."