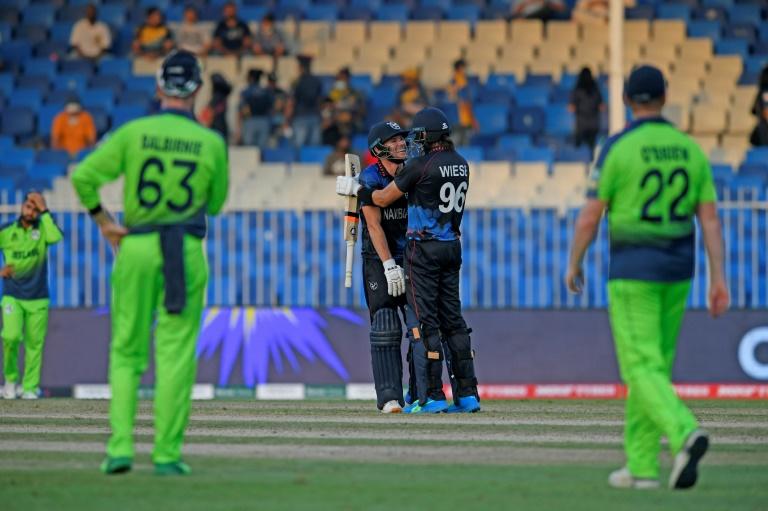 Namibia captain Gerhard Erasmus said on Tuesday hopes his team can lift their level of performance to compete with cricket's elite after reaching the Twenty20 World Cup second round for the first time.

Ranked a lowly 19, Namibia qualified for the Super 12 stage with an eight-wicket win over Ireland, and will now face former winners India and Pakistan as well as New Zealand, Afghanistan and Scotland.

They begin in Abu Dhabi on Wednesday against a Scotland team that suffered a crushing 130-run loss to Afghanistan in their opening match.

"As a player as well, I'm very excited to rub shoulders with the best in the world," said Erasmus, whose unbeaten 53 helped Namibia past Ireland last week.

"Associate cricket is quite a dogfight at times, and if you get through stages like this and you get to reap these rewards, most definitely you enjoy all of those fruits."

After Scotland come Afghanistan and their talented spin duo, Rashid Khan and Mujeeb Ur Rahman, before Pakistan, New Zealand and India -- three main contenders for the title.

"Over the next week, we're going to have to up our level and get into this challenge with all of our energy, but we're ready to do that," said Erasmus.

"I think, if we can start off well tomorrow against the Scottish side, that will give us more and more momentum to get away with and hopefully have a good one throughout the tournament."

Scotland, who like Namibia also came through the opening round, were served a dose of reality by Afghanistan after being bundled out for 60 -- their lowest score in T20 internationals.

Wicketkeeper Matthew Cross was one of five Scotland batters dismissed for a duck as spin accounted for nine of their 10 wickets in Sharjah.

"It was disappointing, but these are the kinds of things that can happen to any team, as we've seen in the tournament already," said Cross.

"We've quickly put it behind us and learnt what we needed to and moving on to Namibia tomorrow."

Scotland upset Bangladesh in the first round as they finished top of the group, and Cross said they can't afford to let the Afghanistan loss affect them too much.

"We've got to back ourselves and believe in what we've done so far. We're playing a team tomorrow in Namibia that we know a bit more about, and we expect to bring a better performance tomorrow."