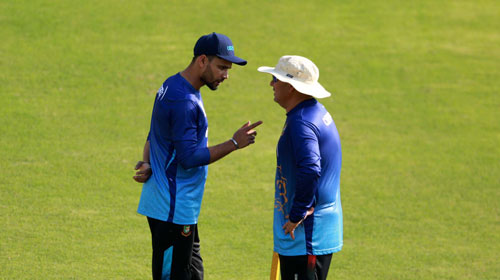 Former Bangladesh national team captain Mashrafe bin Mortaza was disappointed with the side’s recent defeat against Sri Lanka in the Super 12s of the T20 World Cup. He also termed the current team management of Bangladesh as a 'rehab center' for coaches.

Since the defeat, Mahmudullah Riyad and Liton Das have faced a lot of criticism. Mahmudullah was criticized for bowling changes and Liton for losing two important catches during the important moment of the game.

Mashrafe backed skipper and batter Liton regarding the mistakes in the defeat against Sri Lanka in the T20 World Cup a couple of days ago.

In a post on his personal Facebook account on Tuesday, Mashrafe questioned whether the head coach Russell Domingo, who stepped inside the pitch during the drinks break delivered any message to Mahmudullah.  If he did the coach should have challenged the media about handing the ball to part-timer Afif Hossain in the 13th over and to himself in the prior over.

Mashrafe further said that the coach should have talked to the captain, if he did not, during the break. The messages from the team management help captains choose from various probable decision-making options. The former captain also questions the decision of not using Nasum Ahmed despite having him in the playing XI.

Further, he said not to blame Liton for the two catch missed, but rather to look at how much work has been done in the fielding department, noting that the present fielding coach [Ryan Cook] is the sole survivor from the previous coaching panel.