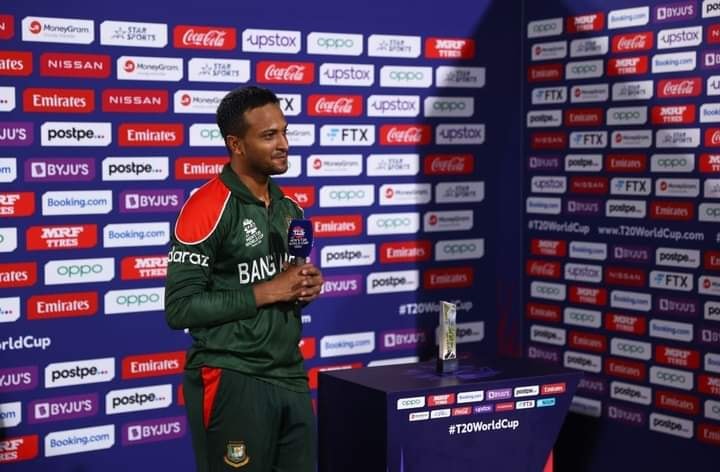 With the win over Oman, Bangladesh keeps their T20 World Cup hopes alive. The game had its ups and downs, but the Tigers eventually held their nerve to win by a score of 26 runs. After an upset loss to Scotland on the opening day of the competition, the Tigers needed to clinch this must-win game.

Shakib Al Hasan had a match-winning effort with both bat and ball, earning him the Player of the Match award. Mohammad Naim and Mustafizur Rahman provided excellent support for the southpaw.

"This win will settle our nerves. We have another game that we have to win. Fingers crossed. Have to win against PNG and then see what happens," Shakib said at the post-match presentation.

"Scotland match hurt the whole team. We were not expecting it (the defeat). But should give credit to Scotland. They were very confident before the game. It was pretty tough because the Scotland loss was hurting us," the player of the match added.

According to Shakib, Oman played good cricket and gave Bangladesh a tough time in the middle.

"Oman played good cricket. They were in the game for the most part. But we held our nerves. Credit to go to Oman the way they're playing. They're playing with a lot of heart," Shakib concluded.

Despite the victory, Tigers captain Mahmudullah says there are still many places to improve. He praised Shakib and Naim for their outstanding partnership in the first innings, which set the tone for Bangladesh.

"We'll take this win, but I think there are a lot of areas we need to improve. I hope everyone is happy. Thanks to the crowd that came in, they expect us to win. Delivering a win for them, for the country is the most important thing. Shakib and Naim batted brilliantly, they had a good partnership and that took us to 150-plus," Riyad said.