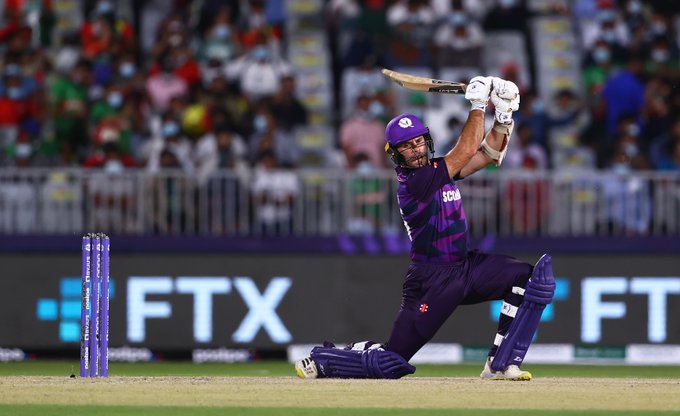 Scotland skipper Kyle Coetzer on Sunday hailed Chris Greaves for his sacrifices that included delivering parcels for Amazon before he starred in the team's upset win over Bangladesh in the Twenty20 World Cup.

He then took the two key wickets of Shakib Al Hasan and Mushfiqur Rahim with his leg spin as world number six Bangladesh managed just 134-9.

"It was an incredible day for him but certainly it wasn't a surprise for us. We knew he had the ability to do this," said Coetzer.

"Really proud of Greaves, he had to sacrifice a lot. He was delivering parcels for Amazon not long ago and now he's getting man of the match and playing against Bangladesh."

Greaves, paying just his second international match, put on a crucial 51-run seventh-wicket stand with Mark Watt, who hit 22, to take the attack to the opposition after Bangladesh elected to field first.

Greaves, who does not have a central contract with Cricket Scotland, said he was delighted with his all-round display.

"We were in a tough situation obviously and it doesn't always go that way," he said.

"It was just to rebuild the innings at that stage and see where we could go from there. I was happy to be that person. With the score on the board, you've got something to bowl at."

Fast bowler Brad Wheal returned figures of 3-24 from his four overs as Scotland remained persistent in their effort in what is their fourth appearance in the T20 World Cup.

Coetzer urged the guardians of the game to give more opportunities to the Associate Nations to show their skills at the highest level.

"The exposure is really, really important for us and any Associate team. Sides like Scotland, Nepal or Malaysia when they perform and have a good game and win games of cricket it drives the cricket within their country," said Coetzer.

"The youngsters' aspire to try and play the game and when those opportunities are dried up, so to speak, it's very hard to then encourage the cricket in the country.

The top two teams from Group B will advance into the Super 12 stage of the World Cup.

Scotland are behind table-toppers Oman who thrashed Papua New Guinea by 10 wickets in the tournament opener earlier in the day.

"We certainly want to make a scene. This our opportunity, this is our platform to do that," said Coetzer.

"It (the win) showed the strength and depth we have amongst our players and the belief we have. That certainly is a great start to the tournament."