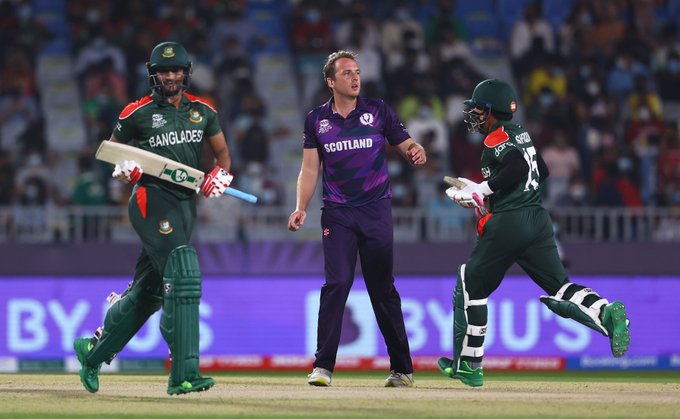 Bangladesh were defeated by Scotland in their opening match of the ICC T20 World Cup on Sunday. The game swung back and forth like a pendulum numerous times, but Scotland emerged victorious at Al Amerat.

At the post-match press conference, skipper Mahmudullah Riyad stated that 140 was a reachable score, but the Tigers' batting unit was simply not good enough on the night.

"I think the wicket was quite good and 140 was gettable. We were missing that one big over in the middle. Bowlers did their job really well but the batting unit wasn't good enough tonight," Mahmudullah said.

"When you can't chase 140, there needs to be a look-in, need to correct the mistakes. We still need to be positive and figure out where we made mistakes, and not try to repeat them," he added.

Bangladesh's bowlers had reduced Scotland to 53-6 before Chris Greaves hit a match-winning 45 and then took two key wickets to create a big upset on day one of the 16-nation tournament.

He took down Shakib Al hasan and Mushfiqur Rahim in two overs with his leg spin after the Bangladesh spinners had shone following their decision to bowl first.

"I think the bowlers are on the right track. We picked up six wickets I think within 60 runs, but after that they had a good partnership," said Mahmudullah.

"I think they played better cricket than us, and we were just not good enough tonight."

Bangladesh fans are known for their passionate support and Mahmudullah said "we disappointed them".

Top two team from Group B will advance into the next stage and Scotland are behind table toppers Oman who thrashed Papua New Guinea in the tournament opener earlier in the day.