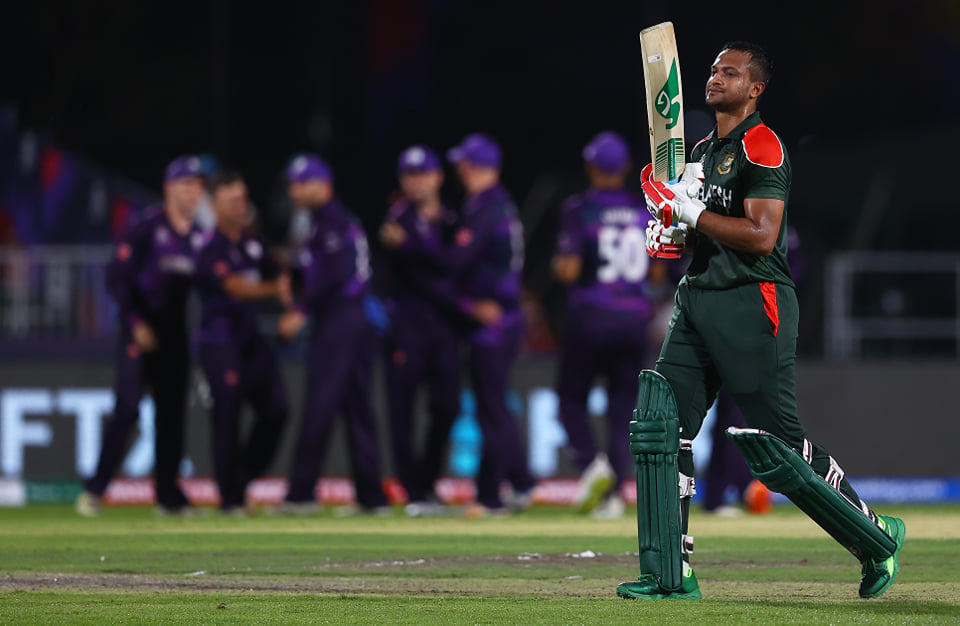 Scotland stunned Bangladesh with a six-run victory on the opening day of the T20 World Cup on Sunday. Chris Greaves shined with bat and ball.

Greaves' 28-ball 45 helped Scotland reach 140-9, and he then used his leg spin to keep Bangladesh at 134-7 in the second first-round match of the day in Muscat.

Greaves, who had earlier helped Scotland recover from a 53-6 deficit with his batting, dismissed Shakib Al Hasan for 20 and Mushfiqur Rahim for 38 to put the brakes on Bangladesh's chase.

Bangladesh lost their openers early before Shakib and Mushfiqur put on 47 runs for the third wicket to put the chase back on track.

Greaves broke the stand with his first ball, getting Shakib caught at the boundary and then bowled Mushfiqar at the start of his second over.

Brad Wheal rattled the middle order with key strikes including skipper Mahmudullah Riyad for 23 and even a late burst by Mahedi Hasan could not take Bangladesh over the line.

Pace bowler Wheal have the best bowling figure of 3-24 as world number six Bangladesh suffered an early setback in their fight to make the Super 12 stage.

Scotland tried to rebuild after losing skipper Kyle Coetzer for nought but Mahedi soon struck twice in an over to send back Matthew Cross, for 11, and opener George Munsey, for 29.

Shakib joined forces with another double strike and his wicket of Michael Leask for nought got him past Sri Lanka's Lasith Malinga as the leading wicket-taker in T20 internationals.

Greaves, batting at number seven, hit back with four fours and two sixes in his 28-ball knock as Scotland plundered 53 runs from the last 30 deliveries.

Scotland are behind hosts Oman, who thrashed Papua New Guinea by 10 wickets in the tournament opener, in Group B.

The top two teams will advance into the next stage and join the heavyweights in the seventh edition of T20's biggest prize.