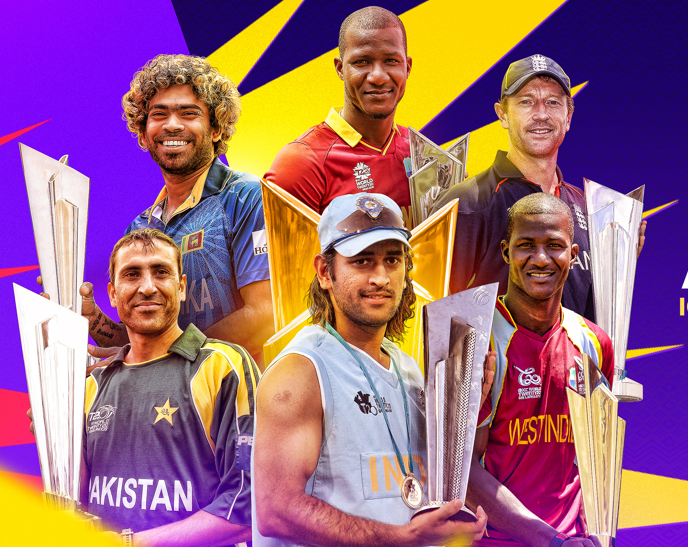 It may only be 14 years old, but the ICC Men’s T20 World Cup is already one of the world’s great sporting events and is set to light up our screens for the seventh time in the United Arab Emirates and Oman.

Whether it’s Yuvraj Singh’s golden over, Umar Gul taking five for six or Carlos Brathwaite making sure we will always remember his name, the biggest T20 moments invariably happen at the World Cup.

Five different teams have lifted the sleek and slender trophy and, after this tournament, an impressive 21 nations will have appeared at some stage, making it a proven petri dish for the growth of the global game.

We have seen teams score 260 and 39, combine for 459 runs in a single night, the Netherlands beat England and Zimbabwe beat Australia. It’s as unpredictable as it is compelling.

Eight men who played in the inaugural tournament in 2007 are in the squads for 2021 and they have seen the game change beyond compare.

The World Cup is at the heart of T20’s tug of war between bat and ball and fans are the biggest winner in that battle, with another chapter waiting to be written in the Middle East.

The first ICC Men’s T20 World Cup was always going to be special - we just didn’t know how special.

The Universe Boss plundered 10 sixes against the hosts in a brutal 117, coming off 57 balls and in a stunning partnership of 145 for the first wicket.

Two days later, Gayle fell for a third-ball duck and West Indies slipped to a shock defeat to Bangladesh, who chased down 165 with two overs to spare. 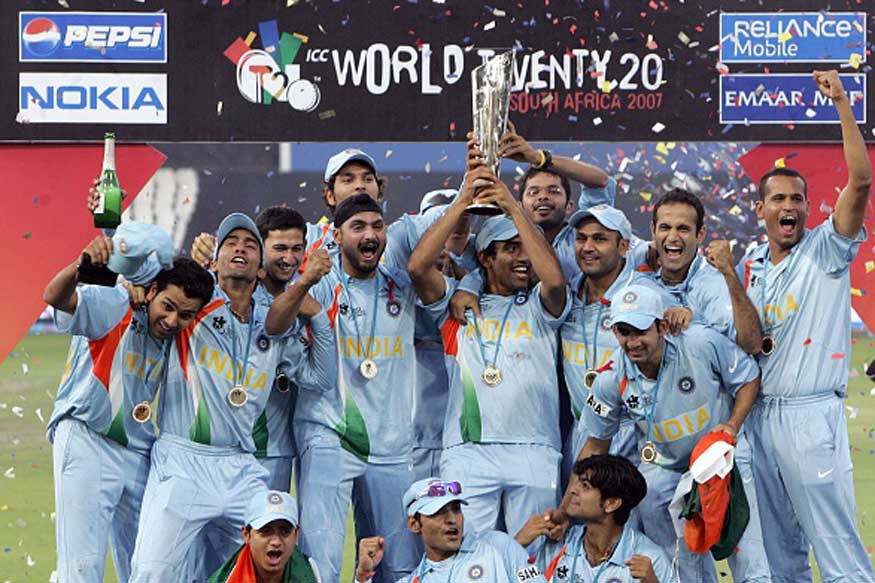 The upsets didn't end there as Zimbabwe stunned Australia to claim their first win over an ICC full member in four years, with Brendan Taylor to the fore with an unbeaten 64.

Pakistan won all three of their games in the Super 8 stage, as skipper Shoaib Malik led from the front and Gul was potent with the ball to down New Zealand and reach the final.

Yuvraj Singh was the defining player of the tournament, starring with 70 from 30 balls in a semi-final win over Australia that set up a final between cricket’s greatest rivals, won by India by just five runs.

Meanwhile, his six sixes in an over against England made Yuvraj an international superstar.

Herschelle Gibbs was the only batter to have done it in international cricket before Stuart Broad bounded in to bowl to Yuvraj in their group stage clash.

An altercation with Andrew Flintoff served only to fire up the Indian legend and Broad’s bowling was soon carted to all four corners of Kingsmead.

The first maximum was arguably the best, a crushing blow over wide long-on that flew more than 100 metres.

Yuvraj reached 50 in 12 balls and wrote a chapter of still unmatched T20 history.

T20 cricket was born in England and that was where it returned for the second edition of its biggest tournament.

But simply saying the word ‘Netherlands’ is enough to send a shiver down the spine of any English cricket fan.

For the standout moment of the 2009 World Cup, you only have to look as far as the first game when the Dutch claimed an incredible four-wicket victory at Lord’s.

Later on, Gayle would be a headline act once again, thumping 88 from 50 balls against Australia with sixes that broke records for the furthest Oval crowds had seen the ball travel at the historic ground. 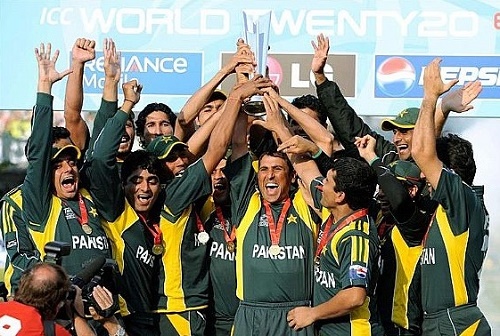 Packed English crowds watched on as Australia were beaten by a Kumar Sangakkara-inspired Sri Lanka to fall at the first hurdle in the group stage.

Ireland downed Bangladesh by six wickets to reach the Super 8 stage on their maiden World Cup appearance, where they were placed in a tough group alongside both eventual finalists.

The hosts claimed a thrilling three-run win over India in the Super 8s but finished third in their group to miss out on the final four.

All of the youngsters watching tried to recreate the ‘Dilscoop’ as Tillakaratne Dilshan lit up the event, making an unbeaten 96 to down West Indies in the semi-final and ending as top run scorer.

Shahid Afridi hit his straps with bat and ball in the knockout stages and made half-centuries in the semi-finals and final as Pakistan beat Sri Lanka by eight wickets in a low-scoring Lord’s affair.

England ended their long wait for a win in an ICC-sanctioned global limited-overs event as they dispatched arch-rivals Australia to be crowned champions in the West Indies.

Kevin Pietersen was named the man of the tournament for his contribution to England’s triumph, finishing with 248 runs from six matches despite getting off to a slow start.

His vital stand of 111 with Craig Kieswetter against Australia was his most decisive contribution, scoring 47 from 31 balls to help England claim their first major ICC tournament win.

In the group stages, Paul Collingwood’s side progressed from Group D in second behind the West Indies after a Duckworth-Lewis induced loss to the hosts and a no-result against Ireland.

But England came alive in the knockout stages, topping their Super 8s group with victories over defending champions Pakistan and one of the pre-tournament favourites, South Africa. 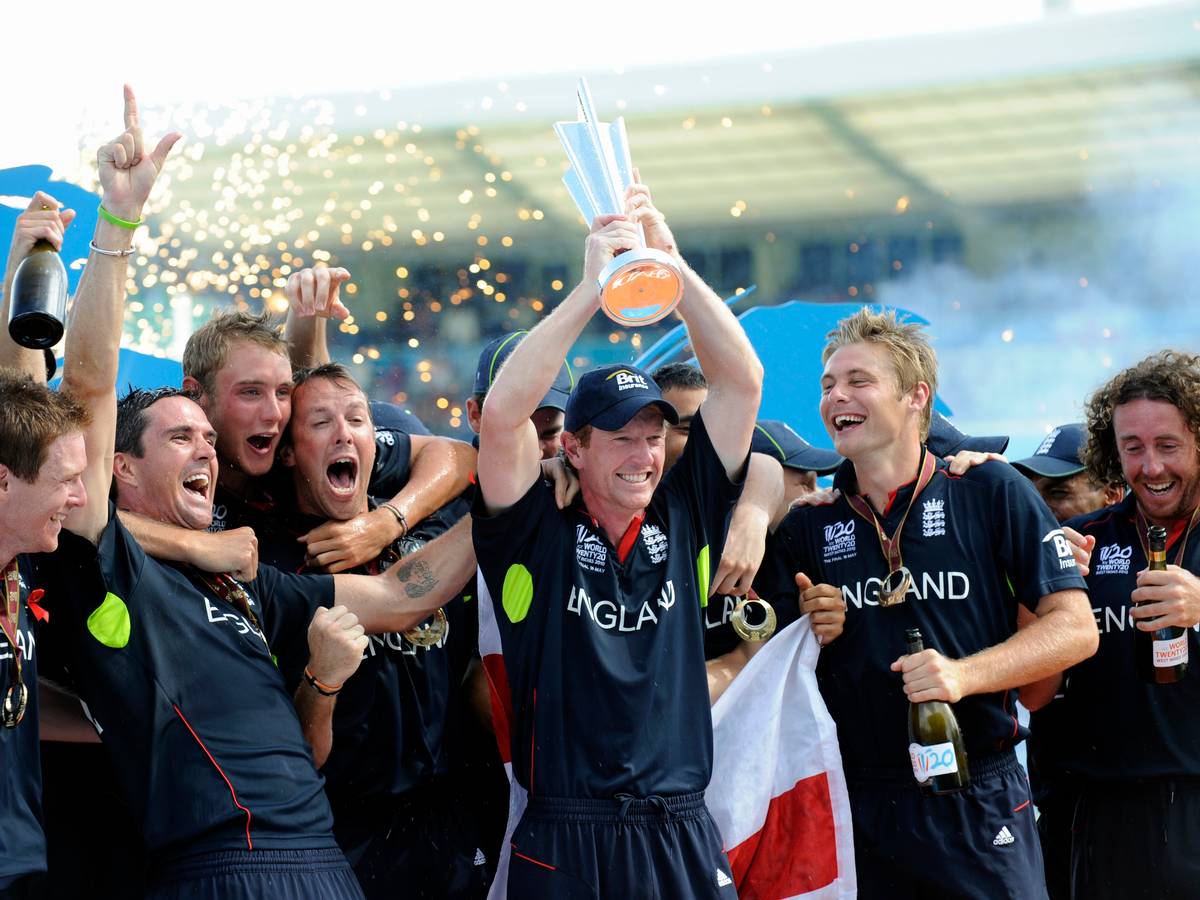 Pietersen missed England’s final Super 8 game to attend the birth of his first child but returned for their semi-final against Sri Lanka and struck an unbeaten 42 off 26 balls in the victory.

On the other side of the draw, Australia also topped their group to progress along with Sri Lanka as the West Indies and 2007 champions India bowed out.

Australia then won a thrilling contest against Pakistan to reach the final where they came up short against England, who chased down 148 to take the title with a seven-wicket win.

The first T20 World Cup to be held in an Asian country delivered another first-time champion as the West Indies stunned the host nation to clinch their maiden title.

Having honed their skills in the sub-continental conditions of the IPL, Gayle, Kieron Pollard and Sunil Narine transferred them to the biggest stage in sensational fashion.

Darren Sammy’s men were consistent from start to finish as they ended an eight-year wait for global silverware following West Indies’ ICC Champions Trophy victory in 2004.

Windies finished second in their group behind Australia before also finishing runners-up in their Super 8s group behind Sri Lanka, who won their first meeting by nine wickets. 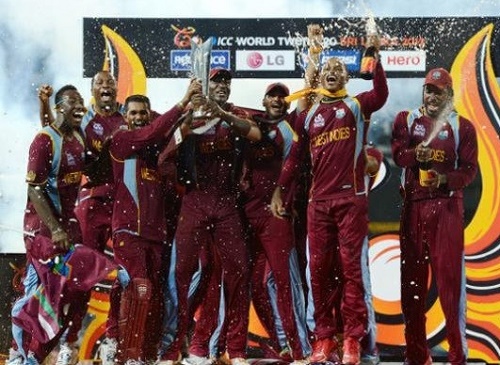 The other group saw table-toppers Australia progress along with Pakistan, with the latter falling at the semi-final hurdle to Sri Lanka in a narrow 16-run defeat.

The West Indies turned on the style in their last-four encounter with Australia, with Gayle’s electrifying unbeaten 75 from 41 balls helping his side storm into the final with a 74-run victory.

But it was Marlon Samuels who took centre stage in the silverware showpiece, striking 78 from 56 balls in Colombo to fire Windies to a memorable 36-run success.

Sri Lanka finally shed their reputation as the nearly men by winning the 2014 ICC Men’s T20 World Cup, beating India by six wickets in the final in Bangladesh.

It was Englishman Paul Farbrace who steered them to glory with the whole team chipping in.

In the final, it was the super death bowling of Lasith Malinga and Nuwan Kulasekara that restricted India to 130-4 and an unbeaten 52 off 35 balls from Kumar Sangakkara saw his side home. 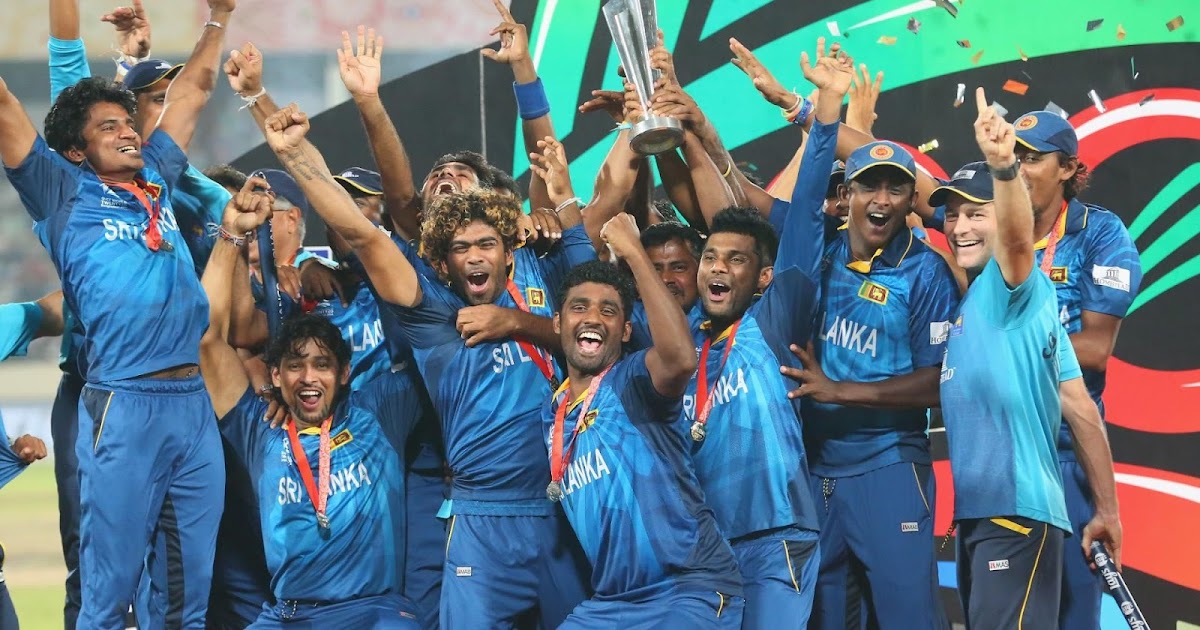 Virat Kohli had made a half-century of his own with 77 off 58 in India’s innings and finished the tournament as the leading run-scorer with 319 at a mightily impressive average of 106.33.

Alex Hales blasted 116 to register England’s first T20I century in a victory over eventual champions Sri Lanka but it was their only win of a disappointing tournament that ended at the Super 10s stage and included another defeat to the Netherlands.

The West Indies entered unchartered territory with a sensational T20 World Cup win in 2016 in India, becoming the first side to claim the title twice.

Marlon Samuels had blasted his nation to glory in 2012 and he was at it again four years later, scoring 85 off just 66 balls to pick up his second player of the match gong in a T20 World Cup final after the four-wicket win over England.

Samuels may have been player of the match but there was no question who had the champagne moment in the final.

Big-hitting all-rounder Carlos Brathwaite went from virtual unknown to cricketing superstar as he smoked Ben Stokes for four consecutive sixes in the final over. 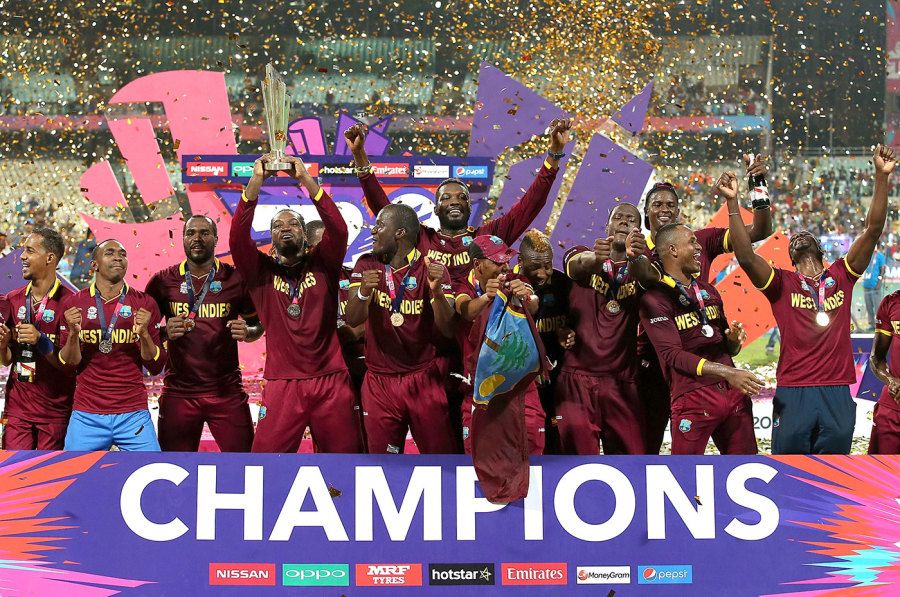 After 2014, 2016 was the second tournament to feature 16 teams and Afghanistan were the main beneficiaries as the only associate nation to make it to the Super 10s.

India’s Kohli was again in supreme form making 82 not out against Australia to ensure his side made the semi-finals.

In the last four, he struck an unbeaten 89 and although his team came up short against West Indies, he was named player of the tournament having made 273 runs at 136.50 in five innings.

Bangladesh’s Tamim Iqbal pipped Kohli to top spot in the batting rankings with 295 runs at 73.75.