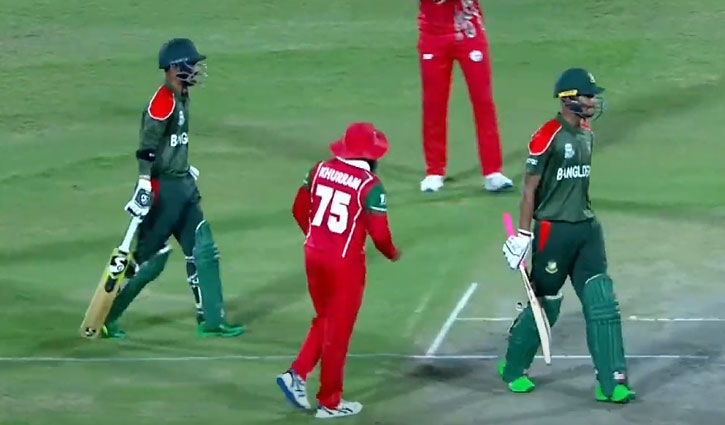 Bangladesh (XI) started the preparations for the upcoming T20 World Cup with a huge victory of 60 runs against Oman A team at Al Amerat Friday. The Tigers lost only 4 wickets and got a huge total of 207 runs. In reply, the hosts' innings stopped at 147 runs.

Oman A team was in trouble from the beginning after chasing the huge target given by Bangladesh. Within 32 runs, they lost three top-order batsmen. Nasum Ahmed made Oman's opener Akshay Patel (0) his victim in the third ball of the first over.

In the next over, Mahedi Hasan took the wicket of Pruthvikumar Macchi, who scored 1 run. Shariful Islam did not allow Khalid Kail to go too far. The hosts could not turn away from this disaster.

Afif Hossain also boosted the team's confidence with the ball. He took the wicket of Oman A team captain Amir Kaleem (7).

In the end, Rauf Attaullah was pulling Oman's innings alone. The wicketkeeper-batsman, who scored 19 off 14 balls, was caught by Nasum and Shariful got his third wicket. Saifuddin bowled Oman batsman Rafiullah for 31 runs in the last ball of the innings.

Earlier, after losing the toss, Mohammad Naim and Liton Das hit fifties as Bangladesh XI posted a mammoth total of 207 against the home side.

Nurul Hasan Sohan ran the destruction at the end. The wicketkeeper-batsman smashed 7 sixes in an unbeaten 49-run innings off 15 balls.

Captain Mahmudullah is not in this match due to back discomfort. Liton is leading the Xi today.

Shakib Al Hasan and Mustafizur Rahman are in the IPL. Taskin Ahmed is not in this match from the World Cup squad.