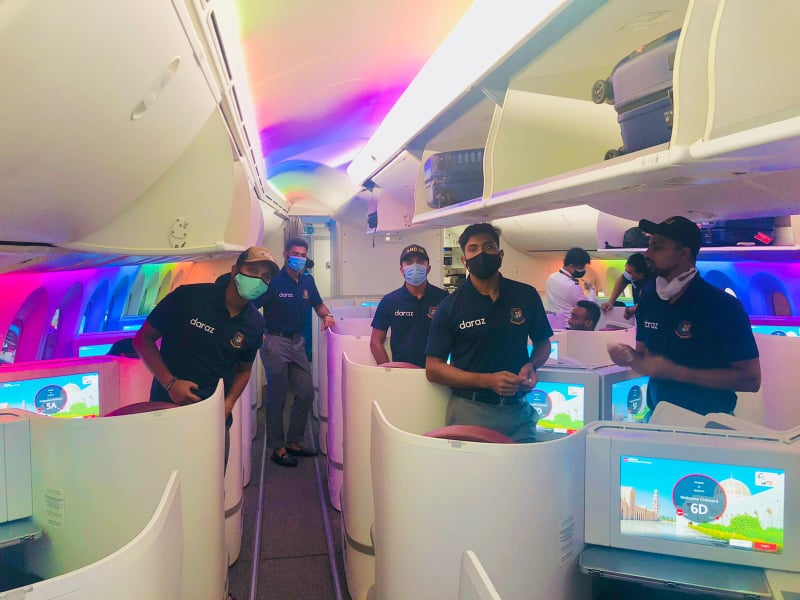 Bangladesh cricket team have reached Muscat, Oman at 9:30 am on Monday as they left Dhaka Sunday midnight by a Biman Bangladesh Airlines.

Bangladesh team departed the following dilemma with the flight schedule due to the tropical cyclone Shaheen that had hit Oman Sunday.

Bangladesh team were set to depart at 10:45pm but at one point the cricketers were informed that the flight was cancelled and that they should return to their homes.

But the decision altered in a matter of 10 minutes and the cricketers were called back to the airport to board the flight to Oman.

The tourists will then travel to UAE for the official practice games against Sri Lanka and Ireland on October 12 and 14 respectively.

Three members of the squad – Shakib al Hasan, Mustafizur Rahman and Liton Das - will join the team directly in Muscat.

Bangladesh will begin their T20 World Cup campaign by first playing the qualifiers.

Bangladesh in the first phase of the competition have been slotted in Group B with co-hosts Oman, Papua New Guinea and Scotland.

In the first game of round one, Bangladesh will take on Scotland on October 17 at Al Amerat Cricket Stadium in Muscat.

Bangladesh will then face Oman and Papua New Guinea on October 19 and 21 respectively at the same venue.