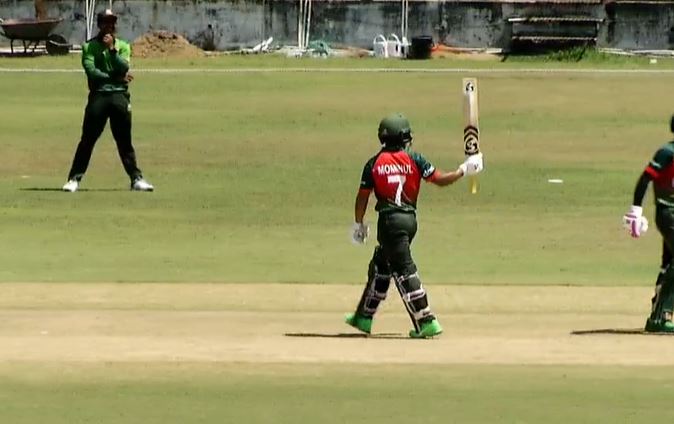 Bangladesh 'A' team registered a 30-run win against the Bangladesh HP team in the second ODI at Chittagong on Thursday.

Tanzid Hasan-Parvez Hossain, the two openers of (HP) team, got off to a great start chasing the mammoth target by the Bangladesh 'A' team. But Rubel Hossain-Kamrul Islam's stopped the duo.

Tanzid made 86 off 102 balls with 7 fours and 2 sixes while 77 runs came from Parvez's bat aided by seven boundaries and 4 sixes. In addition to these two, Towhid Hridoy played a great knock but missed half-century for just one run. Hridoy made 49 runs off 57 balls with one four and a six.

Rubel Hossain took 3 wickets for the 'A' team. However, he was quite expensive as the pacer ended with 69 runs in 10 overs. Besides, Naeem Hasan and Kamrul took 2 wickets each.

Earlier, opting to bat first. The opening pair Mominul Haque and Najmul Hossain Shanto amassed 154 runs for the team.  Shanto returned to the dressing room after scoring 65 runs off 85 balls with two sixes and fours.

Then, Mushfiqur came to the field and played a stormy innings of 62 off 53 balls with 6 fours and 1 six. In the previous match, Mushfiqur had scored 70 runs for Bangladesh ‘A’.

Mominul made a century, also the highest score for the side, he scored 128 runs off 121 balls with 11 fours and two sixes. Besides, Mohammad Mithun scored 25, Mosaddek Hossain 18 and Irfan Shukkur 10 runs.