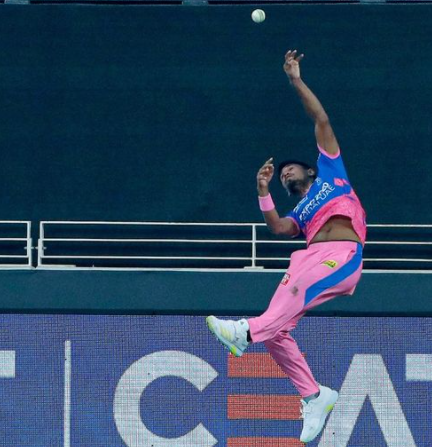 Glenn Maxwell hit his second successive half-century to fire Royal Challengers Bangalore to a convincing seven-wicket win over Rajasthan Royals in the Indian Premier League in Dubai on Wednesday.

The Australian batting all-rounder made an unbeaten 50 off 30 deliveries as Bangalore chased down their victory target of 150 in 17.1 overs in the Twenty20 tournament.

Virat Kohli's Bangalore stay third in the eight-team table, led by Chennai Super Kings, and eye a strong league finish in their bid for a maiden title.

Kohli, who hit 25, and Devdutt Padikkal, who scored 22, started briskly for the opening wicket to lay the foundation for the chase.

Srikar Bharat (44) and Maxwell put on a third-wicket stand of 69 to take the attack to the opposition bowlers despite Bangladesh left-arm quick Mustafizur Rahman striking twice.

Bharat fell short of his fifty but Maxwell, who made a match-winning 56 in the previous game, completed his 50 with two straight boundaries.

Earlier, Royals collapsed from a comfortable 100-1 in 11 overs to 117-5 with debutant left-arm quick George Garton sending back Evin Lewis for 56 and Ahmed striking twice in his first over.

Chahal also struck twice to return impressive figures of 2-18 from his four overs of leg spin and was named man of the match.

Patel, who got a hat-trick in his team's previous win, rattled the middle and lower order and struck on successive deliveries.

Royals, winners of the inaugural edition in 2008, are seventh in the table.

"We don't have anything to lose. That kind of mindset brings a lot of freedom, have seen some funny things happen," said Rajasthan skipper Sanju Samson.