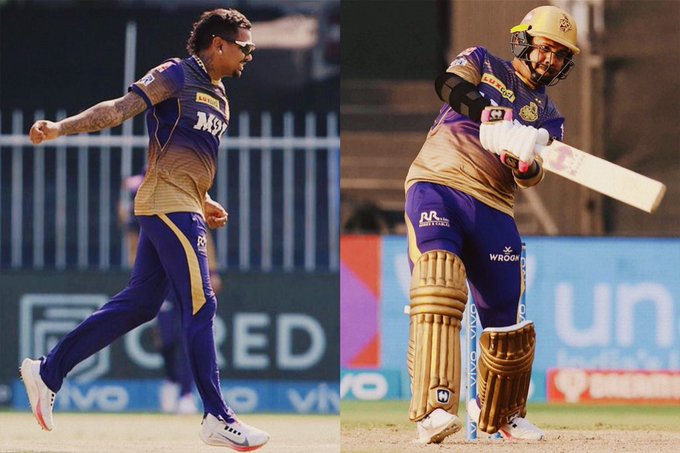 Sunil Narine shone with bat and ball as Kolkata Knight Riders boosted their play-off hopes with a three-wicket win over Delhi Capitals in the Indian Premier League on Tuesday.

Narine returned figures of 2-18 with his spin to limit Delhi to 127 for nine and then hit a crucial cameo innings of 21 as Kolkata reached their target in 18.2 overs on a slow Sharjah pitch.

Eoin Morgan's Kolkata have won three of their four matches in the resumed Twenty20 tournament in the United Arab Emirates to be placed fourth in the eight-team table.

Kolkata were in trouble when Morgan fell for nought and Dinesh Karthik, for 12, but Narine stayed calm to get the two-time champions close to victory.

Narine, a left-handed batsman, smashed South African quick Kagiso Rabada for two sixes and a four to help get his team 21 runs off the 16th over.

He finally fell to Anrich Nortje after his 10-ball blitz but Nitish Rana took the team home with a winning boundary in his unbeaten 36.

Earlier Australia's Steve Smith and skipper Rishabh Pant both made 39 and Shikhar Dhawan hit 24 in Delhi's innings but the rest of the batting faltered against the Kolkata bowlers.

Holders Mumbai Indians take on Punjab Kings in the second match of the day in Abu Dhabi.