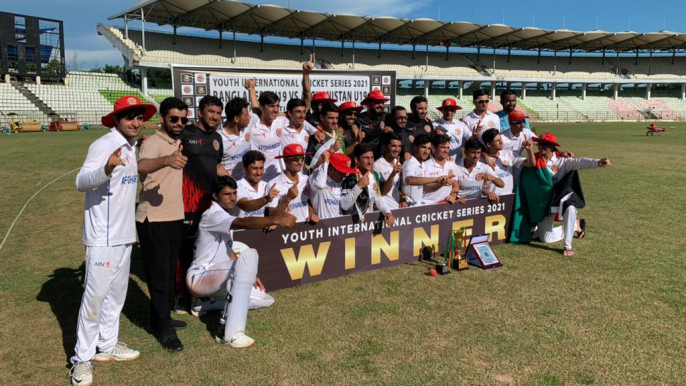 Afghanistan U-19 registered a three-wicket win over Bangladesh U-19 in the only four-day match at Sylhet International Cricket Stadium.

Bangladesh, who resumed at 170-4, managed to take the score to 228 runs losing all wickets. Izharulhaq Naveed took a four-for in the second innings after returning four for 45 in the first innings. Bilal Sami, who got five in the first innings, bagged three wickets.

The visitors chased down the modest target of 110 runs, Bilal Sayedi ensured the victory by hitting a half-century for the visitors. Although, the batters were losing wickets at regular intervals.

He stitched an important 38-run partnership for the fifth wicket with Kamran Hotak before getting dismissed for 54 runs aided by ten boundaries.

The visitors were all out for 281 with a lead of 119 runs in their first innings.

Bangladesh were bundled out for only 162 in their first innings. Aich Mollah was the highest scorer for the hosts with 39. Afghanistan's Bilal Sami bagged a five-wickets and Izharulhaq picked up four wickets.

Earlier, Bangladesh won the first three youth ODIs of the five-match series but the visitors bounced back really well by winning the remaining two matches.