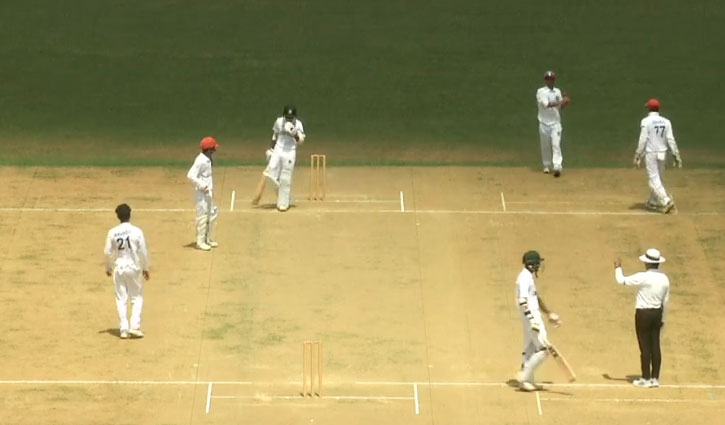 Bangladesh Under-19 lead by 51 runs at the end of day three of the four-day match against Afghanistan Under-19 at Sylhet International Cricket Stadium.

Afghanistan were all-out for 281 in their first innings in reply to Bangladesh's 162. The hosts were 170 for four at stumps, leading by 51 runs with six wickets in hand.

Bangladesh Under-19 did not start well as opener Iftikher Hossain was out for naught. However, opening Prantik Nawrose Nabil played a knock of 76 off 166 with seven fours before being adjudged leg before off Nangeyalia Kharote. Bangladesh were in trouble, then Aich Mollah and Nabil amassed a 91 run partnership.

However, Mollah and Ashraful Islam ensured Bangladesh didn't lose more wickets and finished the day with 170 for four. Mollah was unbeaten on 40 and Ashraful on 14.

Afghanistan resumed the day on 226-8. Opener Bilal Sayedi, who was unbeaten on 101, added 39 important runs for the ninth wicket with Faisal Khan Ahmadzai. Sayedi departed scoring 114 off 340 balls. Ahmadzai was the last man to be dismissed on 39.

The visitors were all out for 281 with a lead of 119 runs in their first innings.

Earlier, Bangladesh were bundled out for only 162. Aich Mollah was the highest scorer for the hosts with 39. Afghanistan's Bilal Sami bagged a five-wickets and Izharulhaq Naveed picked up four wickets.