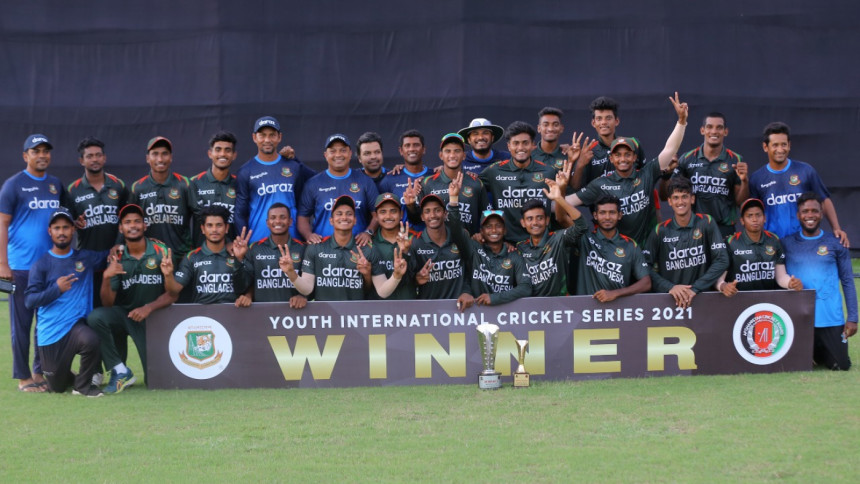 Afghanistan's Under-19 squad ended the series on a high note, defeating Bangladesh's Under-19 team in a thrilling match in Sylhet. With three balls to spare, the visitors won the low-scoring thriller by three wickets.

Bangladesh had already wrapped up the five-match youth ODI series after winning the first three games, but Afghanistan came back strong in the remaining two games.

Afghanistan were well-placed at 73 for two in the 21st over, while chasing a short score of 156. Bangladesh bowlers, on the other hand, got consistent breakthroughs and limited them to 106 for six.

However, Afghanistan skipper Ijaz Ahmad and Izharulhaq Naveed put on a crucial 43-run seventh-wicket stand to push Afghanistan closer to the target. Ijaz was dismissed in the penultimate over's final ball, and Afghanistan needed seven runs from the final over to win.

Naveed struck the winning runs in the third ball of the over. Naveed was unbeaten on 29. Ijaz made 32.

Earlier, batting first, the hosts got off to a good start. Mahfijul Islam and Iftikher Hossain, Bangladesh's openers, combined 48 runs in 12.2 overs before the former was trapped leg before by Nangeyalia Kharote.

Bangladesh vice-captain Aich Mollah, who scored a stunning century in the series opener, failed to score in the following three games. When the squad was in difficulty, he walked out to bat but couldn't get going. The right-handed batsman faced 15 balls but only managed to score two runs.

Bangladesh was six down midway through the innings, and the visitors needed someone to stay around to give the bowlers something to bowl at.

Abdullah Al Mamun made some outstanding contributions during the series, and his decent 82-ball-37 helped Bangladesh reach the 150-run mark. Mamun and Naimur Rohman put on a 47-run partnership for the eighth wicket. The home side was bundled out for 155 in 47.4 overs.