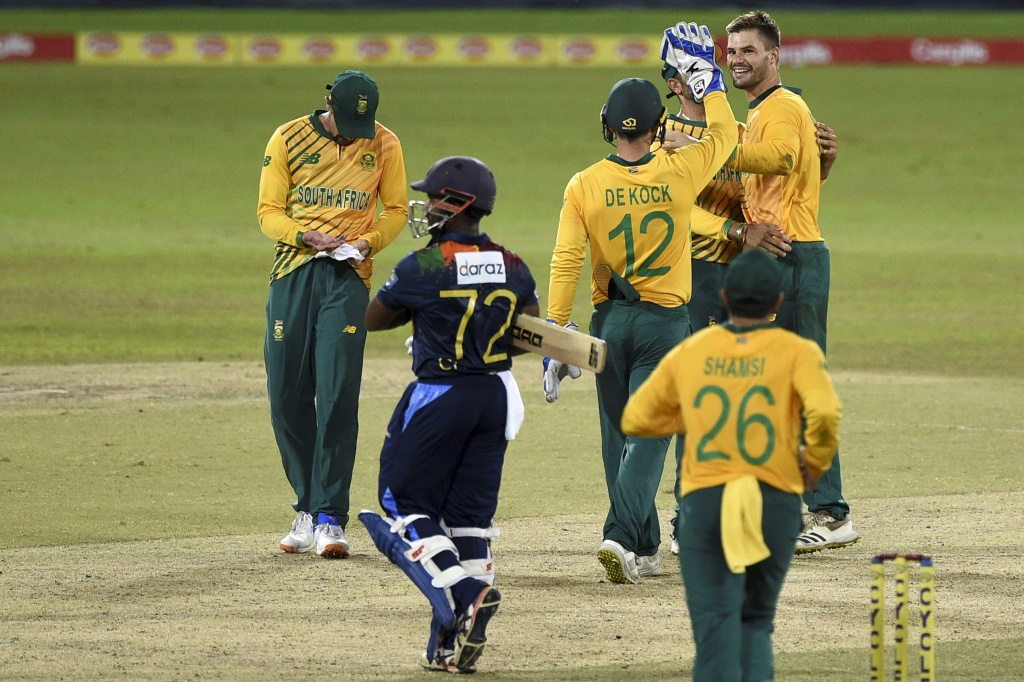 Spinners Tabraiz Shamsi and Aiden Markram set up a crushing nine-wicket win for South Africa in the second Twenty20 international against Sri Lanka to clinch the series on Sunday.

Shamsi and Markram took three wickets each to help bowl out Sri Lanka for 103, a total the tourists chased down in 14.1 overs to take an unbeatable 2-0 lead in the three-match series in Colombo.

Wicketkeeper-batsman Quinton de Kock hit an unbeaten 58 and put on 62 runs with opening partner Reeza Hendricks, who made 18.

The left-handed De Kock struck his 10th T20 half-century and first against Sri Lanka to see the team home with Markram for company on 21 after Hendricks' departure.

But it was the spinners who set up victory with world number one T20 bowler Shamsi, a left-arm wrist spinner, returning impressive figures of 3-20.

Markram, a top-order batsman who has been named the replacement for England's Dawid Malan in the Indian Premier League side Punjab Kings, returned a career-best 3-21 with his off-spin bowling.

"Aiden did his own thing and got three wickets against left-hand batsmen, it was a tactical thing," skipper Keshav Maharaj said after the win.

"Shamsi really opened up one end and the bowlers made my life easier, whoever came on did the job."

He will join Punjab in the United Arab Emirates for the remainder of the IPL -- re-starting September 19 -- that was cut short by the coronavirus pandemic in India.

It was South Africa's third straight T20 series win after West Indies and Ireland and their sixth successive triumph in the shortest format.

Fast bowler Anrich Nortje struck first with the wicket of Dinesh Chandimal for five before the spinners took over and got the remaining nine scalps.

Shamsi, a left-arm wrist spinner, combined with fellow slow bowlers to wrap up the opposition innings.

Bjorn Fortuin took two wickets and Maharaj claimed the final one. Both are left-arm spinners.

South Africa made short work of their modest chase with De Kock leading the charge to reach his fifty off 42 balls as he hit seven fours.

Leg-spinner Wanindu Hasaranga took the only wicket of Hendricks.

"Our batsmen needed to rotate the strike more. We have to change our approach, batting in the middle period has been a concern for a long period, consistently for two to three years," Sri Lanka skipper Dasun Shanaka said.

"We will come up with better plans in the next game. It's our approach and mindset that needs to change in the T20s, we should have a strong mindset and we need to have a belief in the team."

The third T20 is on Tuesday at the same venue.