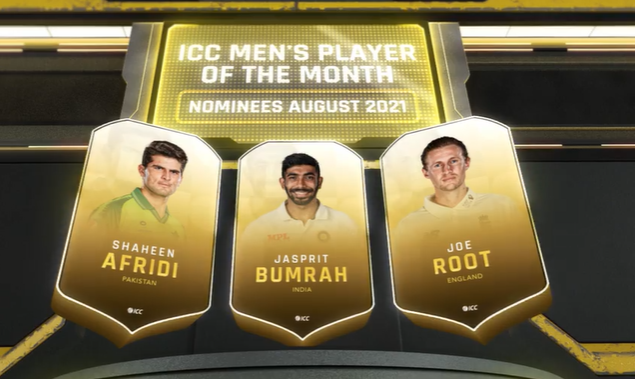 The ICC Player of the Month nominees for August 2021 have been published, featuring Joe Root, the England captain, Pakistan pacer Shaheen Afridi and his India counterpart Jasprit Bumrah.

In two Tests against the West Indies in August, Afridi promised wickets whenever he was given the ball. He finished the series with 18 wickets, including 10 in the second Test, which helped Pakistan tie the series at 109 runs.

India's Bumrah was as impressive against England with his quick bowling. He grabbed nine wickets in the first Test, but he garnered just as much praise for his contribution with the bat in the second Test at Lord's, when he and Mohammad Shami put on an 89-run ninth-wicket stand that was crucial to India's victory.

In the third Test, England leveled the series, thanks largely to skipper Root, who has amassed runs at will.

In August, he hit hundreds in all three Tests against India, a run that sent him to the top of the MRF Tyres ICC Test batting rankings.