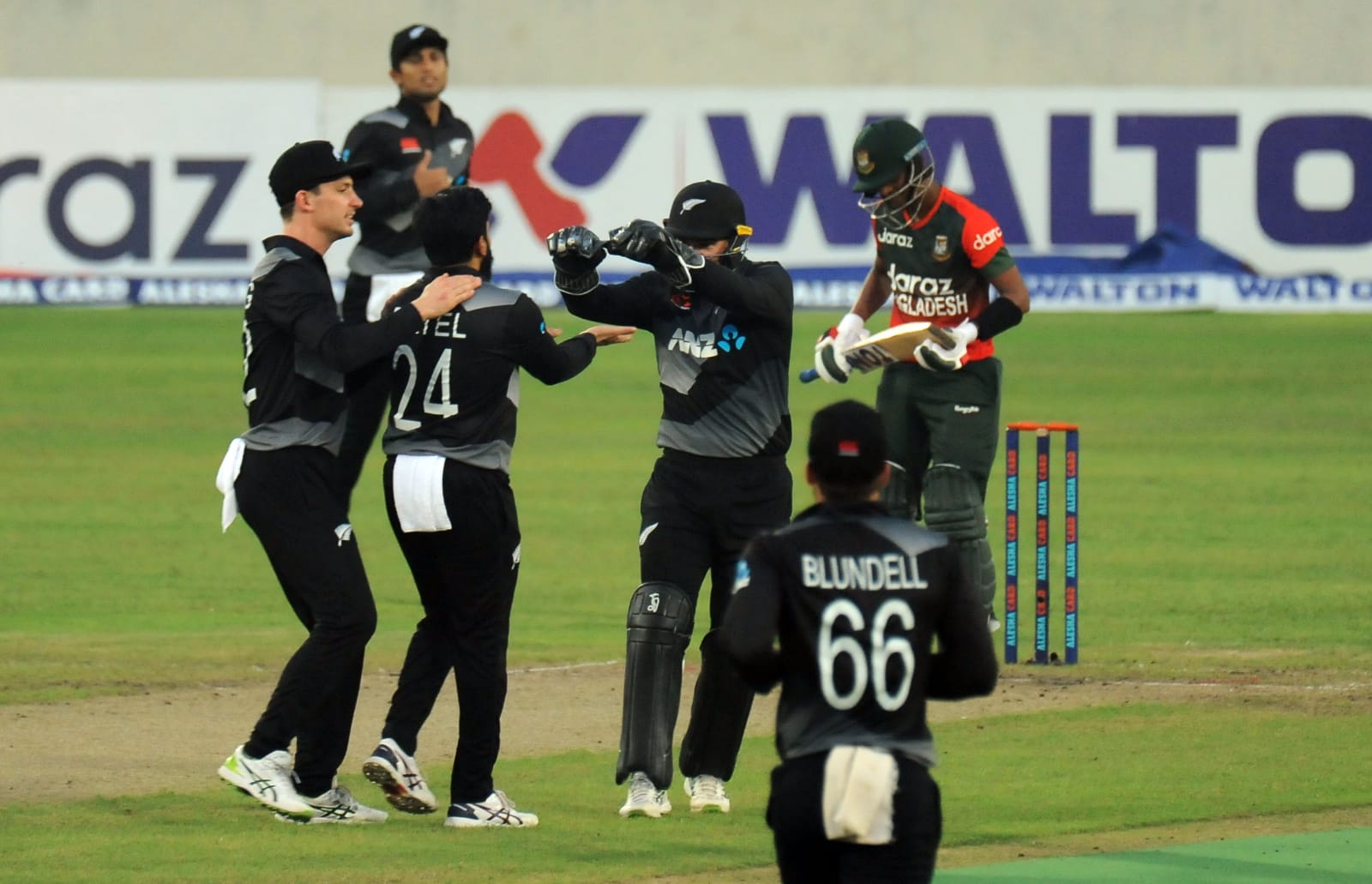 New Zealand spinners boosted the side to secure the series by clinching a 52-run win against Bangladesh in the third T20I of the series at the Sher-e Bangla National Stadium, Mirpur on Sunday.

Bangladesh skittled down for their joint-lowest on 76 runs while chasing the mediocre target of 129 runs before the top-order stumble down within the first four overs.  As New Zealand spinners dominated on the slow wicket with Cole McConchie taking three wickets and Azaz Patel finishing with four.

McConchie trapped opener Liton Das with a lbw, dismissing the right-handed batsman after he had scored 15 from 11 balls. Then, the wickets of Mahedi Hasan (1) and Shakib al Hasan were swiftly taken by Ajaz (0).

Mahedi was caught by Henry Nicholls while playing a shot to the mid-wicket and Shakib returned for naught with a catch at the long-on.

Another opener, Mohammad Naim (13), was bowled by Rachin Ravindra, he also could not settle down on the pitch for long, setting 32-4 on the scoreboard.

Bangladesh lost two more batsmen while crossing the 50-run mark as skipper Mahmudullah was out for (3) and Afif Hossain was removed by Patel for a golden duck.

However, Mushfiqur Rahim tried to turn things around but no other batsman could stand up, at the end of the innings he remained unbeaten on 20 runs.

Mustafizur awarded a wicket-maiden by taking the wicket of Allen on his first over, after the batter attempted to hit at mid-on but was caught by Mahmudullah.

Mohammad Saifuddin made the breakthrough for Bangladesh by thumping Will Young (20) and de Grandhomme for naught in the same over. Young wanted to flick the ball on the leg side but missed completely which resulted an lbw.

Then, well-settled batsman Ravindra who scored 20 off 20 deliveries fell prey to Mahmudullah. Following the wicket, Kiwi captain Tom Latham was also dismissed in the next over by Mahedi with a catch to the bowler.

Nicholls and Tom Blundell rescued the side by putting a 76-run partnership after the fall of top-order batsmen. At the end of 20 overs, the Kiwis collected 128 runs losing five wickets.

Mahmudullah reached the milestone to become the first Bangladeshi player to appear in the 100th T20 Internationals for the side.