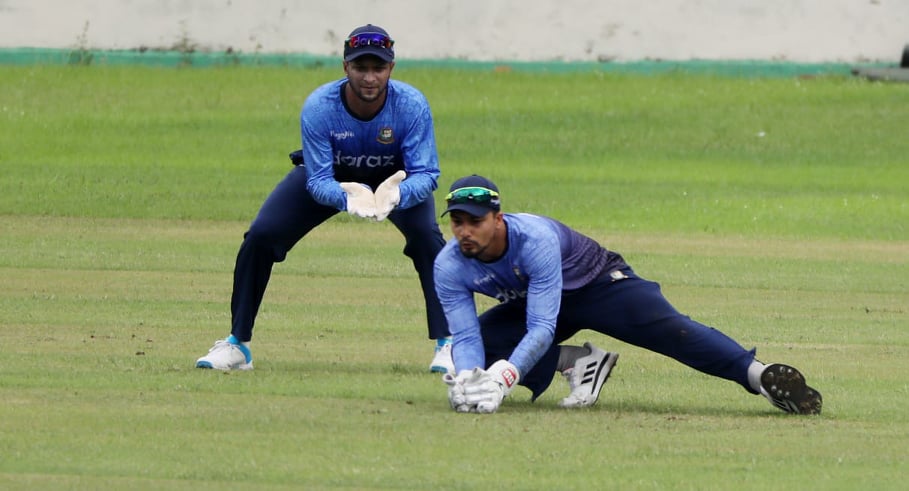 Bangladesh head coach Russell Domingo revealed in a pre-series press conference on Monday that Nurul Hasan Sohan will keep wickets in the first two games and the wicketkeeping duties will be split between him and veteran Mushfiqur Rahim in the remaining games.

Sohan retained wickets throughout the Zimbabwe tour and the five-match home T20I series against Australia in the absence of Mushfiqur and Liton Das. Nurul performed admirably enough to preserve his place in the New Zealand T20I squad.

"Sohan (Nurul Hasan) will definitely keep wickets in the first two games. The plan is to divide up the wicketkeeping between him and Mushfiq in the latter matches. Mushfiq will keep in the third and fourth match and we'll decide who'll keep in the fifth match based on their performances. We want to have options available here," said Domingo.

Earlier this month, Bangladesh and Australia played the slowest ever T20I series in terms of run rate, and Domingo is hoping for better wickets this series, which will be the last series for Tigers before the T20 World Cup in Oman and UAE.

"Unfortunately, I am not a groundsman. I am hoping for a good wicket. This time of the year with the humidity and rain around, there's not much sun. It might be harder to get those types of surfaces as you get in a different time of the year. I am hoping for good wickets. I am assuming a good, normal Mirpur wicket where 150-160 is a good score," added the 46-year old.

With Liton Das' return to the team, there are three competitors (Mohammad Naim and Soumya Sarkar) opening positions as the head coach remarked this kind of healthy competition within the team is very important.

"I don't think the opening is a problem. Before the last series, we recorded the highest T20I opening partnership (against Zimbabwe). We'll assess the fitness of Liton and then see what the XI will be. Competition is important and it's great to see some depth developing in this series," added Domingo.