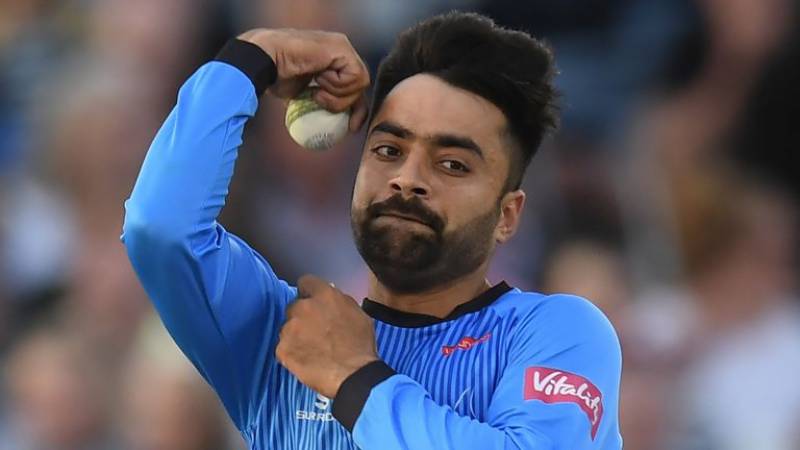 Rashid Khan saw Sussex into the finals day of English cricket's T20 Blast despite the turmoil in his native Afghanistan as his dashing innings capped a five-wicket win over Yorkshire on Tuesday.

After Luke Wright had made 54, Khan came in with south coast club Sussex needing 43 off 21 balls to reach a victory target of 178.

But the Afghanistan T20 captain, best known as a leg-spinner, unfurled his 'helicopter' shot as he struck three fours and two sixes to see Sussex home with an unbeaten 27 off just nine balls.

"I just needed to back my skills, and thanks to the coaching staff for sending me in a bit earlier to finish the game," said Khan after a match played at Durham because Yorkshire's Headingley headquarters is staging the third Test between England and India starting Wednesday.

Rashid, not available for finals day, added: "I tried my best to stay still and do the basics right. They bowled where I wanted it, and I finished it off well."

Khan's impressive all-round display came against the backdrop of thousands of people mobbing the airport in Kabul, the capital of Afghanistan, as they try to flee the Taliban's hardline brand of Islamist rule following the group's takeover of the country.

"He can't get his family out of Afghanistan and there's a lot of things happening for him."

Pietersen said at the time it was remarkable to see Khan perform as he did under the circumstances.

"For him to turn up and put on a performance like this under the pressure that he is currently under, for him to be able to forget that stuff and navigate his story and continue the momentum that he has -- I think that's probably one of the most heart-warming stories of this Hundred so far."