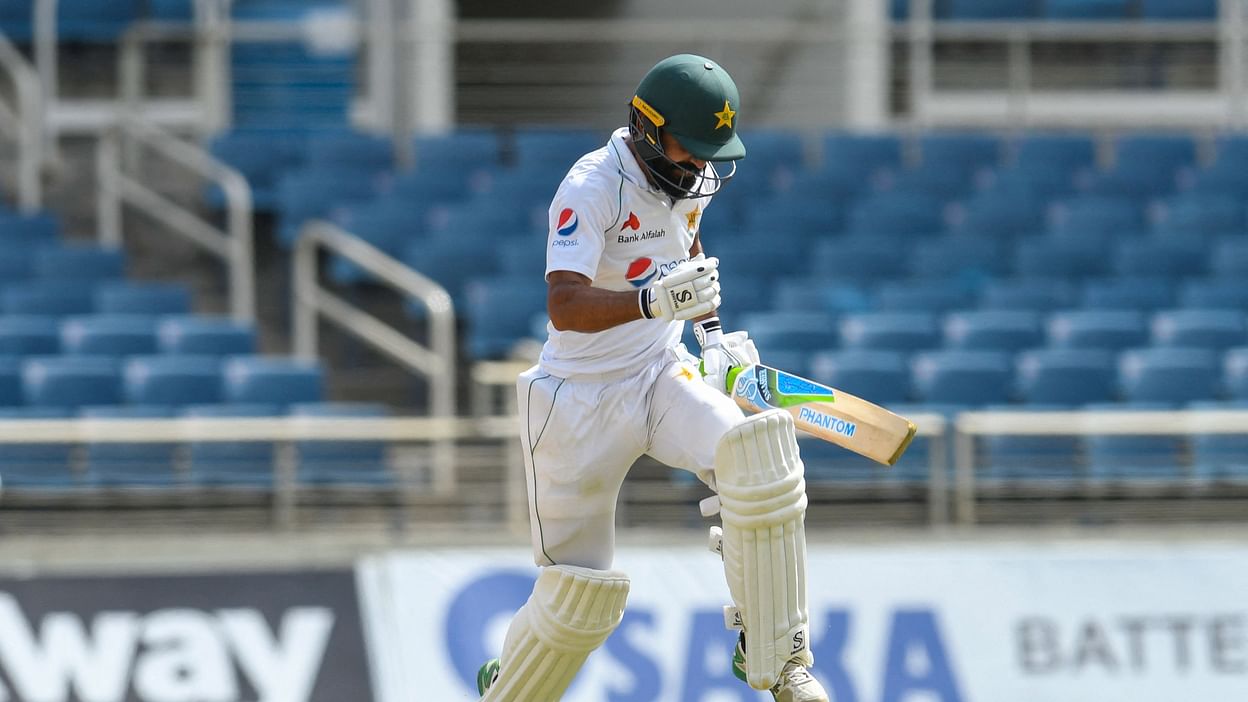 Fawad Alam's fifth Test century and Shaheen Shah Afridi's new ball potency pushed Pakistan into the ascendancy on a truncated third day of the rain-affected second Test against the West Indies at Sabina Park on Sunday.

Fawad's unbeaten 124 lifted the tourists to 302 for nine declared in their first innings before Shaheen removed both openers swiftly and Faheem Ashraf added another to have the home side at 39 for three in reply at stumps.

Edged by one wicket in a thrilling finale to the first Test on the same ground a week earlier, Pakistan's quest for a series-levelling victory has been frustrated by showers and inefficient covering of the playing square.

All of the second day was lost to showers and a sodden outfield while play did not properly get underway on day three until early afternoon as a damp area at the southern end of the pitch, in line with the bowlers' run-ups, was a source of concern for the West Indies.

Initial attempts to get play going in the morning following another 90-minute delay resulted in just eight deliveries being bowled before the complaints of Jason Holder, supported by his fellow bowlers and captain Kraigg Brathwaite, were eventually heeded by the match officials who engaged in lengthy deliberation before suspending play.

When play finally commenced in the heat of the afternoon, Pakistan, who resumed from the overnight position of 212 for four, were almost entirely reliant on Fawad to push them up to the 300-run mark.

Two wickets for Jayden Seales and two in two balls for Holder kept the tourists in check.

However Fawad, who resumed his innings on 76 after retiring through heat exhaustion and severe cramps on the opening day, would not be denied a fourth Test century in 12 innings.

It was an innings which reinforced the value of his return to the international scene after being ignored for 11 years after his debut in senior Pakistan colours in 2009.

Having returned to the crease at the fall of Faheem's wicket, and then seeing Mohammad Rizwan and Nauman Ali depart in quick succession, the 35-year-old left-hander stayed focused and reached the cherished landmark with a pull for two off Kyle Mayers.

Despite the disappointment of contributing to the run out of Hasan Ali, his unbeaten 124, which occupied over six hours in which he faced 213 deliveries and stroked 17 fours, was a stellar effort.

"It was very challenging out there and what Babar (Azam) and I did on the first day was very important," said Fawad at the end of the day in reflecting on his and the team's effort.

"You always feel proud when you score a century for your country so I am very happy right now. My dad has always been my motivation. He told me to keep on trying and my time will come and now it has and I am trying to make the most of it."

Shaheen then made the most of his opportunity with the new ball by removing Kieran Powell and Brathwaite in successive overs.

When Faheem bowled Roston Chase it brought in nightwatchman Alzarri Joseph who hung on with Nkrumah Bonner to carry the fight for the West Indies into the fourth day.

West Indies lead the series after winning the first Test by one wicket at the same venue a week earlier.