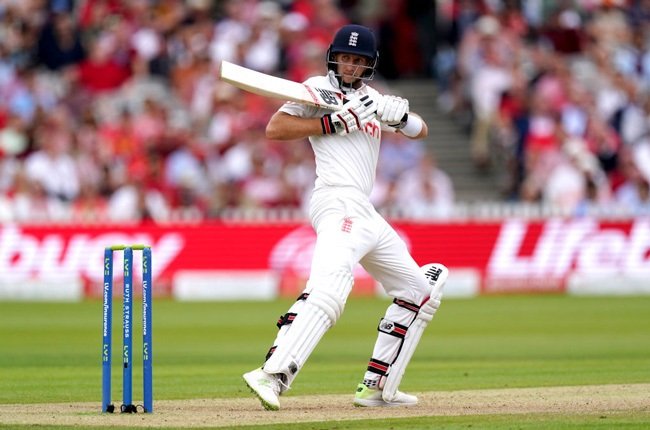 England captain Joe Root's latest rescue mission with the bat could not prevent India maintaining their grip on the second Test at Lord's on Friday.

But amid yet another top-order collapse, star batsman Root was 48 not out.

England's position could have been worse after India resumed on 276-3 but pace-bowling great James Anderson kept the tourists in check with 5-62.

"India probably still have the edge but if we can get a couple of big partnerships that gets us right back in the game," said Anderson.

Root had come in with England struggling at 23-2 after paceman Mohammed Siraj took two wickets in successive deliveries -- with the recalled Haseeb Hameed out for a golden duck.

Rory Burns and Root repaired some of that damage in a third-wicket partnership of 85 before the left-handed opener was lbw for 49 to Mohammed Shami.

"Joe's been amazing throughout his career and the stats in the last 12 months, with the pandemic and everything, it's been superhuman," said Anderson.

His exit brought in Hameed, playing his first Test since the last of his three previous caps, all in India five years ago.

England were 23-2 -- the 15th time in their 19 Test innings this year they had lost their second wicket before reaching 50.

That left Root, the lone England batsman to pass fifty at Trent Bridge with scores of 64 and 109, facing a familiar repair job.

Root blocked the hat-trick ball and a square-cut four off Ishant Sharma that took him to 14 saw him surpass Graham Gooch's tally of 8,900 Test runs to go second behind Alastair Cook (12,472) in England's all-time list.

Earlier, Anderson took his 31st five-wicket haul in 164 Tests and seventh at Lord's.

"It definitely is as special," said Anderson, who took his first Test-match 'five for' at the 'home of cricket' 18 years ago.

"To get seven here is just incredible really...Hopefully, it's not my last time on the honours board."

It was a particularly commendable return given the 39-year-old Anderson had come into this game nursing a thigh problem.

England were already without Stuart Broad after Anderson's longstanding new-ball partner had been ruled out of the rest of this five-Test series with a calf injury.

"I don't feel an extra responsibility because he (Broad) is not here," said Anderson, whose current tally of 626 Test wickets has been bettered only by two retired spinners in Sri Lanka's Muttiah Muralitharan (800 Tests) and Australia's Shane Warne (708).

But it was Ollie Robinson who made the key breakthrough when, with just Friday's second ball, he had KL Rahul mistiming a drive to short cover for 129 after the opener had added just two runs to his overnight score.

It was the end of a more than six-and-a-half hour innings of 250 balls that included 12 fours and a six, with Rahul also sharing an excellent first-wicket stand of 126 with Rohit Sharma.

"I was feeling good and fresh this morning so I was really frustrated I missed out on a juicy half-volley," Rahul said.

This innings followed Rahul's 84 in the first Test, where he was only selected after Mayank Agarwal was hit on the head batting in the nets at Trent Bridge.

Rahul, turning to the match position, added: "We know there's not a lot happening off the pitch and we will need to be really disciplined with our lines and lengths."