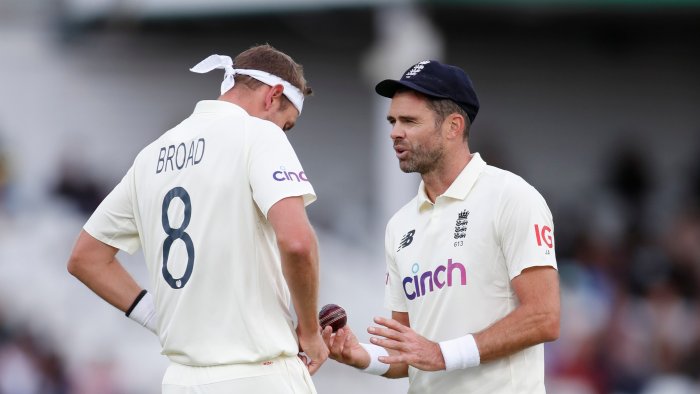 An already-depleted England could be without both Stuart Broad and James Anderson in a home Test for the first time in nearly a decade when they face India at Lord's on Thursday.

Broad, 35, has been ruled out of the rest of the five-match series after pulling up with a calf problem ahead of the second Test at Lord's starting Thursday, which could have marked his 150th appearance in the format.

Meanwhile the 39-year-old Anderson is struggling to be fit for the second Test with a thigh problem sustained on Wednesday. Broad suffered his injury warming-up on Tuesday.

Broad's 524 wickets make him England's second-most successful Test bowler behind longtime new-ball partner Anderson, whose 621 are an all-time record for any fast bowler at this level.

Before Broad was ruled out, the England and Wales Cricket Board (ECB) announced that Saqib Mahmood, uncapped at Test level, had been called up as cover.

England have not played a Test without either Anderson or Broad since October 2016 and it is nine years since they both missed one on home soil.

Anderson and Broad's injuries are bound to leave the ECB facing fresh questions over a domestic fixture schedule which left both bowlers short of match practice, neither of whom now plays in limited-overs matches, heading into a showpiece series in the absence of red-ball county cricket.

"As players we have to manage the times we are in and the schedule we have but I would like to see red-ball cricket alongside Test cricket," said England captain Joe Root, whose 64 and 109 in last week's rain-marred first Test at Trent Bridge helped secure a draw that prevented India going 1-0 ahead.

"But as it is, that is difficult to do, and we just have to try and adapt the best we can."

Earlier this season, England defeated Pakistan in a one-day international series despite having to select an entirely new squad following a Covid-19 outbreak within their camp.

"When we've seen that previously in the summer, in the Pakistan series, there were opportunities that arose for other people coming in and they rose to those challenges," said England batsman Jonny Bairstow.

Haseeb Hameed could force his way into an England top three where opening batsman Dom Sibley and Zak Crawley have both been struggling for runs.

England remain without two all-rounders in Ben Stokes, taking an indefinite break from cricket due to mental health issues, and the injured Chris Woakes, while express fast bowler Jofra Archer has been ruled out for the rest of this year with an elbow problem.

India will be without pace-bowling all-rounder Shardul Thakur because of a thigh injury.

After India had the better of the first Test, captain Virat Kohli said his side had the right "template" for their attack in four fast bowlers and left-arm spinner Ravindra Jadeja.

"For us it's about finding that perfect balance but if someone like Shardul is not available, we will definitely think first about how we pick up 20 wickets not plug-in another guy who can give us some runs with the bat," Kohli said.