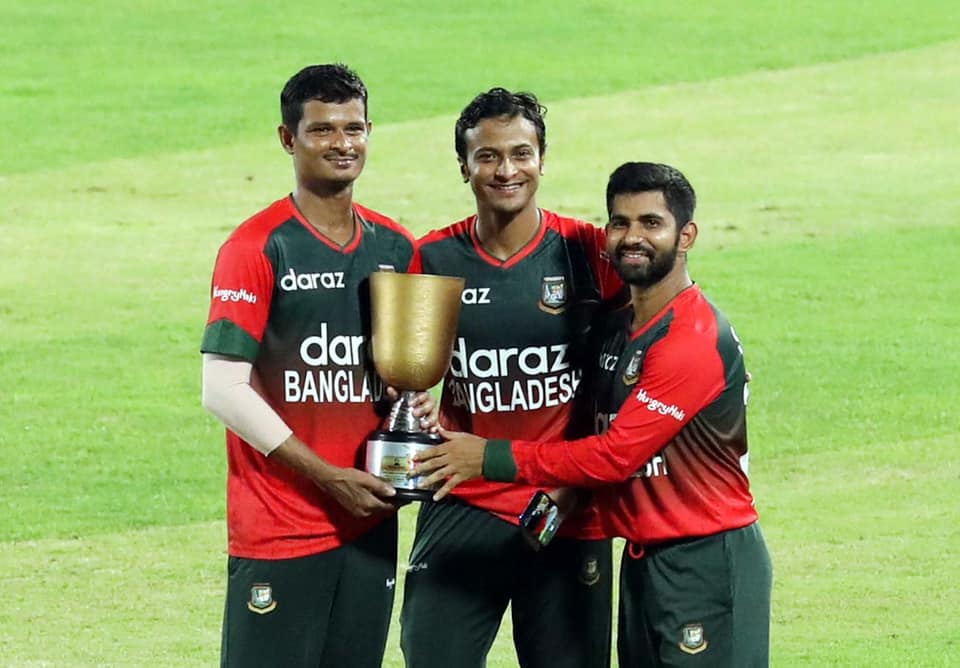 Shakib Al Hasan, Bangladesh's great all-rounder, is ecstatic after his team won the five-match T20I series against Australia 4-1 and for achieving yet another milestone in his illustrious career.

Bangladesh defeated Australia by 60 runs in the fifth and final game of the series at Sher-e-Bangla National Stadium in Dhaka Monday. Chasing 123 runs, Australia were restricted to their lowest ever T20I score 62 inside 14 overs.

Shakib, who becomes the only player to grab 1000 runs and 100 wickets in T20I, expressed that this achievement is very inspiring to play better for the team.

“Of course it is a good feeling whenever there are such achievements [of scoring 1000 runs and picking 100 wickets in T20I]. It inspires you to play better for the team. But this feat would never have been possible without the support of the team-mates and management that I have played with so far. I have also been backed well by the supporters. That was important,”

“I am really happy and I believe I will try to contribute for the team for many days to come,” said Shakib to the media following the game at SBNS Monday.

There is debate over the wickets used in the series, which were kept low, sluggish, and turning, which will not be the case in the two host countries for the World T20 tournament, the UAE and Oman.

Shakib, on the other hand, believes the victories over Zimbabwe in Zimbabwe, Australia, and the next series against New Zealand at home will serve as a tonic in the locker room and will help Bangladesh prepare for the ICC T20 World Cup in October-November this year.

“You might not get the confidence looking at the scorecard but winning the series against Zimbabwe in Zimbabwe then winning against Australia 4-1 then we are to play New Zealand. These will surely boost us going into the World Cup. I think we are getting a good preparation,”

“The batsmen might not be able to score much runs as we are playing on slow, low, turning wickets but in the end the winning is above everything. This gives confidence in the dressing and creates a winning mentality,” Shakib explained, who finished as the Man of the Match and was also adjudged as the Man of the Series for his 114 runs and seven wickets from five games..