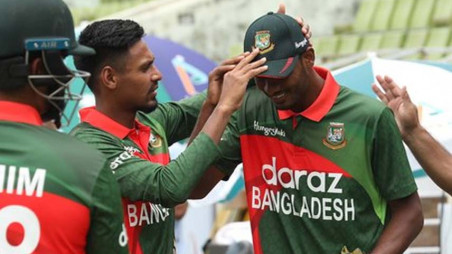 Bangladesh young pacer Shoriful Islam said on Sunday [August 8] that he is trying to learn ‘cutter’ from the cutter master Mustafizur Rahman.

The bowling partnership between Mustafiz and Shoriful added another dimension to the Australia series. The duo has taken 7 wickets each against the visitors so far. Shoriful said he is enjoying his bowling partnership with Mustafizur and trying to learn cutter from him.

"I am trying to learn cutters from him. His cutter is very different. I have been trying to bowl that at the nets. He said that the cutter is very deadly against the right-handers as it stops a bit and then changes its direction," said Shoriful.

Cutter is very useful in Mirpur's wicket, particularly against right-handers, which is why young Shoriful is keen to unleash it against the Aussies.

"He said that cutter is very effective against the right-handers in Mirpur because the ball turns like the spinners.  So he said that I could use it more often,” he said.

Before his debut in the national team, Shoriful played with Mustafiz in the Bangabandhu T20 Cup. After that, they also played in DPL for Prime Bank.

“I have played Bangabandhu T20 with Mustafiz Bhai, then we played Dhaka Premier League together. Now I am playing in the national team with him. He always spoke positively. He can easily read a batsman’s minds. When I come to bowling, he tells me beforehand what should be done,”

The 20-year-old fast bowler also said that the senior players always motivate and inspire the team.

"Shakib (Al Hasan) Bhai, (Mahmudullah) Riyad Bhai always motivate us no matter how small a total we are defending. You know, when players of their stature keep faith in the young players, it gives them a lot of courage."