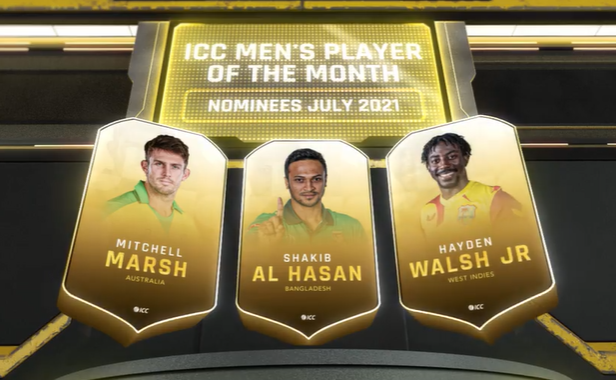 The International Cricket Council (ICC) today announced the nominees for the ICC Player of the Month Awards for July 2021 to recognise the best performances from both male and female cricketers across all forms of international cricket.

Bangladesh Ace all-rounder Shakib Al Hasan has nominated for July, who was consistent across formats versus Zimbabwe.

In the one-off Test, Shakib snared a total of five wickets, followed by a five-wicket haul in the first ODI and he ended as the highest wicket-taker in the series with 8 scalps.

His purple patch followed him in the next match this time with the bat as he blazed to an unbeaten 96* and completed a tricky chase and series win against Zimbabwe.

The other two players are Mitchell Marsh from Australia and Hayden Walsh Jr. from West Indies.

Earlier in May Bangladesh wicketkeeper-batsman Mushfiqur Rahim had been nominated for the ICC Player of the Month for May and won it.