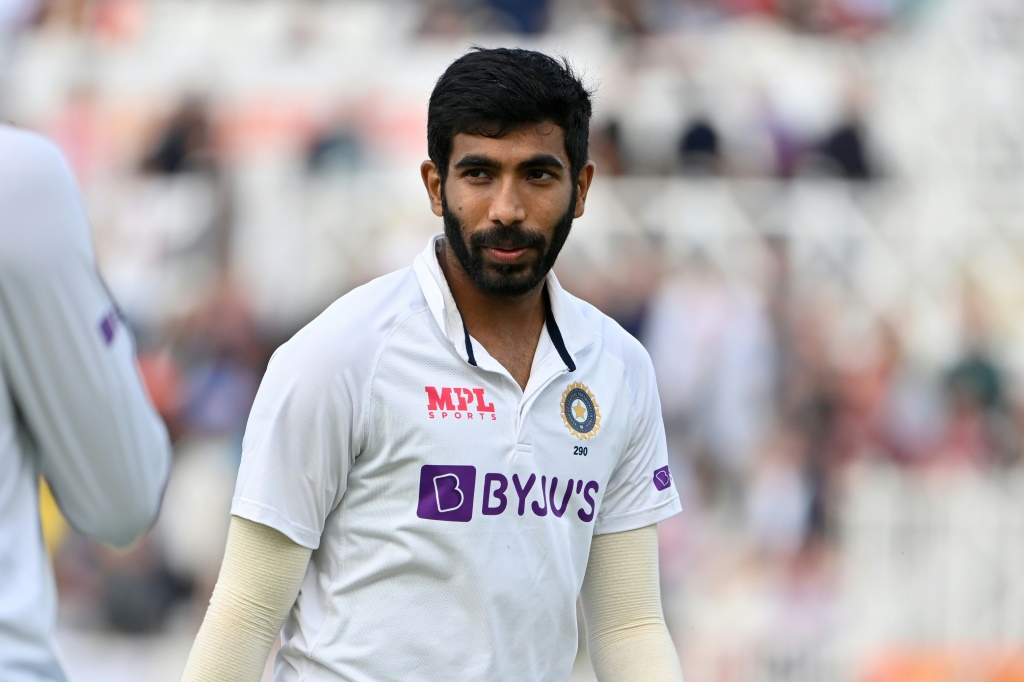 Bumrah took 5-64 in an England second innings where Root's 109 on the fourth day was the centrepiece.

That gave the unorthodox paceman impressive match figures of 9-110 after he had taken 4-46 in a meagre England first innings total of 183, where Root's 64 was again the top score.

At stumps, India were 52-1 in their second innings, needing a further 157 runs to reach a victory target of 209.

Rohit Sharma and Cheteshwar Pujara, who ended the day's play by cover-driving Ollie Robinson for four, were both 12 not out.

Stuart Broad produced a fine ball to have KL Rahul caught behind for a well-made 26 that followed the recalled opener's 84 in India's first-innings 278.

Earlier, a roaring Root was unusually animated in celebrating his 21st Test century, punching the air and his chest.

His latest rescue mission -- England were 46-2 when he came in -- was all the more valuable given his side could not call on star all-rounder Ben Stokes, who has so often bailed out a faltering top order, now his close friend is taking an indefinite break from cricket to "prioritise his mental health".

Frustratingly for England, Dom Sibley, Jonny Bairstow and Dan Lawrence all got to 25 before each played a key part in their own dismissal.

England resumed Saturday beneath sunny blue skies on 25-0, a deficit of 70 runs, with Rory Burns 11 not out and Sibley unbeaten on nine.

There was little left-hander Burns could do with a Mohammed Siraj delivery that seamed late to have him caught behind for 18.

Bumrah prolonged Zak Crawley's run of low scores when, he squared up the batsman, with wicketkeeper Rishabh Pant holding a fine diving catch low to his right.

Crawley's exit for six meant he had scored just 156 runs in 14 Test innings since his brilliant 267 against Pakistan at Southampton last year.

Root showed his class, however, with two boundaries in four balls off Siraj -- a textbook cover-drive followed by a clip through midwicket.

But a third wicket partnership eventually worth 89 ended in tame fashion when Sibley -- whose 28 took a laborious 133 balls -- drove loosely at Bumrah and was brilliantly caught, two-handed, by a diving Pant off the inside edge.

Despite the increasingly overcast and floodlit conditions favouring India's quicks, Bairstow was largely untroubled until, on 30, he gave his wicket away by pulling Siraj straight to Ravindra Jadeja at deep square leg.

Siraj put his finger to his lips in a 'send-off' gesture and was spoken to by the umpires soon afterwards.

Lawrence and Buttler, two of four first-innings ducks, both avoided a pair.

But they each fell to Shardul Thakur, with Lawrence lbw for 25 and Buttler, leaving a straight ball, bowled for 17.

Thakur finished with an economical 2-37 in 13 overs.

Root, however, on-drove him down the ground to complete a 154-ball hundred in style with his 14th four.

But the first over with the new ball saw Root caught behind off a fine delivery from Bumrah after nearly five hours at the crease.

All-rounder Sam Curran made a useful 32 --  the second highest score of the innings -- before he mistimed a drive off Bumrah to mid-on.

And next ball the 27-year-old had his sixth five-wicket haul in 21 career Tests when an excellent inswinging yorker bowled Broad off his toes.