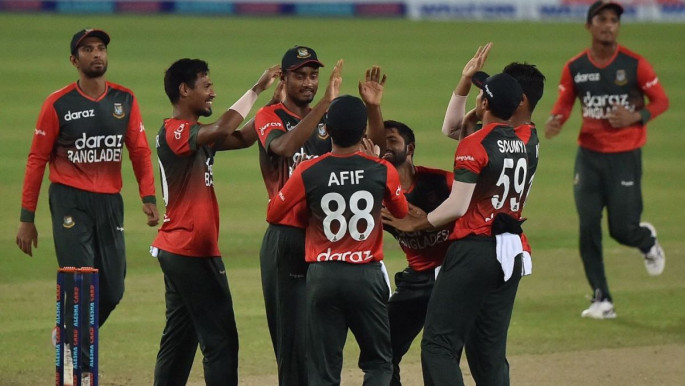 Bangladesh won the third T20I against Australia by 10 runs today at the Sher-e-Bangla National Stadium in Mirpur, thanks to Mustafizur Rahman's splendid last over.

On a slow and gripping Mirpur pitch, Bangladesh restricted Australia to 117 for four after scoring a respectable 127 for nine. Bangladesh has now defended the lowest total in T20s. In the first T20I, the Tigers had defended a 131-run total against the Aussies.

With Dan Christian and Alex Carey in the middle, Australia needing 23 off 12 deliveries when Mustafizur was handed the ball by Mahmudullah Riyad in the 19th over.

Mustafizur made a mockery of both Carey and Christian, as neither of the Australian batters could pick up the ace left-arm pacer's cutters and slower deliveries.

Mustafizur concluded an extraordinary effort by giving just one run in the penultimate over of the game, flummoxing the visitors with his fast off-cutters and finishing with 0-9 from four overs.'

Mustafizur's superb 19th over gave Australia a mountain to climb in the last over. But, when Carey began the last over by slamming a short Mahedi Hasan delivery into the stands for a massive six, it appeared that the Aussies were still in the game.

With the exception of a waist-high no in the fourth delivery, Mahedi recovered well and bowled a tight over from then on, preventing Australia from winning their first game of the series.

The Tigers bowled compactly throughout, with spinners Shakib Al Hasan and Nasum Ahmed both picking up a wicket while bowling economically. Shoriful Islam, the young left-arm seamer, was also essential, taking the crucial wickets of Moises Henriques and Mitchell Marsh, who hit a 47-ball 51.

Earlier, skipper Mahmudullah hit his fifth T20I fifty, and his first as captain, to help Bangladesh to a respectable total. During Mahmudullah's 53-ball 52, Australia's tight bowling and outstanding fielding prevented Bangladesh from accelerating at any point in their innings.

On debut, Australia pacer Nathan Ellis took a last-over hatrick. Ellis, who finished with three for 34 in four overs, became the first Australian to bowl a hattrick in a T20I and only the third Australian overall to do so.