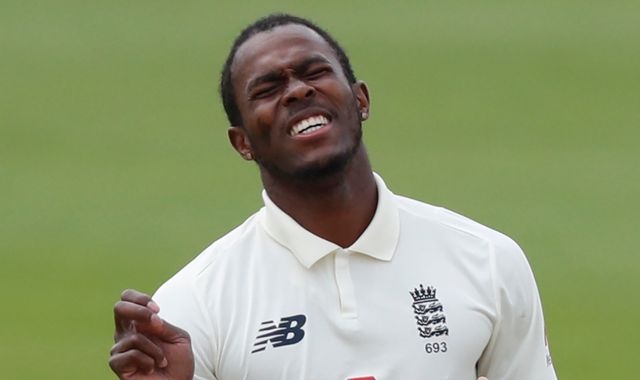 England fast bowler Jofra Archer will miss both the Twenty20 World Cup and the Ashes series in Australia after the England and Wales Cricket Board announced on Thursday he had been ruled out with an elbow injury.

The ECB said in a statement that scans last week on the currently sidelined 26-year-old's right elbow had revealed he had suffered a recurrence of a stress fracture.

"In response to these findings, he has been ruled out for the rest of the year and will miss the current LV= Insurance Test series against India, the ICC Men's T20 World Cup 2021 and the Ashes series in Australia," the ECB statement added.

Archer was a central figure in 2019's World Cup triumph on home soil and the Sussex quick was considered vital to England's hopes of winning both the T20 World Cup and regaining the Ashes in Australia.

But he now faces the prospect of a potentially career-ending injury, with major doubts over whether the Barbados-born bowler will ever be able to resume his 13-match Test career given the demands of the five-day game.

Archer was first diagnosed with a stress fracture in his bowling arm after breaking down on the South Africa tour of 2019-2020, before returning to action.

He has since been treated with cortisone injections in the joint, most recently during another injury-hit tour of India earlier this year.

Archer then underwent surgery in May to remove a bone fragment, having had an operation in March to remove a piece of glass from his finger following a bizarre injury involving a dropped fish bowl.