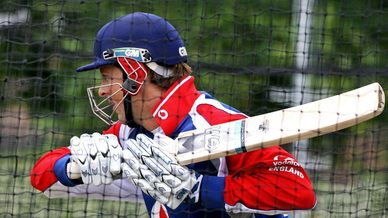 Batting coach Marcus Trescothick said an underprepared England must "raise our game" after they slumped to 183 all out on the opening day of the first Test against India at Trent Bridge.

Several members of England's top seven had not played any red-ball cricket since a humiliating loss to New Zealand in June -- the team's first home Test series reverse in seven years -- with limited overs matches dominating a domestic scheduled that includes the inaugural season of the Hundred.

Facing a high-class India attack would be tough enough in any event and their quality was evident on Wednesday as Jasprit Bumrah took 4-46 in 20.4 overs and new-ball partner Mohammed Shami a miserly 3-28 in 17.

England captain Joe Root top-scored with 64 in an innings where no other batsman made more than 29, with the hosts losing six wickets for 22 runs before India reached stumps on 21-0.

Trescothick, a former England opener, was asked afterwards if Root's men had been given enough preparation time.

"Probably not, no," he told reporters. "Scheduling is always an issue, trying to get the balance right for the batters moving into Test series."

Trescothick added: "We don't want to use it as an excuse but we'd love to get more time into them at the crease -- bowling with the red ball, facing the red ball and have the preparation be slightly better.

"But quite often you go into a Test match series knowing that you're coming in off the back of a white-ball competition and that's just the way international cricket is.

"You have to find your way as an international player to make that work."

India were beaten by New Zealand in the inaugural World Test Championship final at Southampton in June and Trescothick paid tribute to their attack by saying: "India are at the most potent they have been in a while, and they have a lot of bases covered.

"Even the guys who are not playing in the team have a lot of quality. They have a good stock of bowlers, they didn't get to be in the World Test Championship final for no reason."

That strength in depth was on show when India came from behind to complete a superb series win in Australia earlier this year.

"A lot of people watched when they went to Australia and how well they performed," said Trescothick. "We know it is a real contest, and we have got to raise our game.

"We have the ability but it's about executing that."

Shami, meanwhile, said there was no secret to his success.

"I'm just looking for my length and line, nothing too much, just keep it simple," he explained. "You have to use your skill."