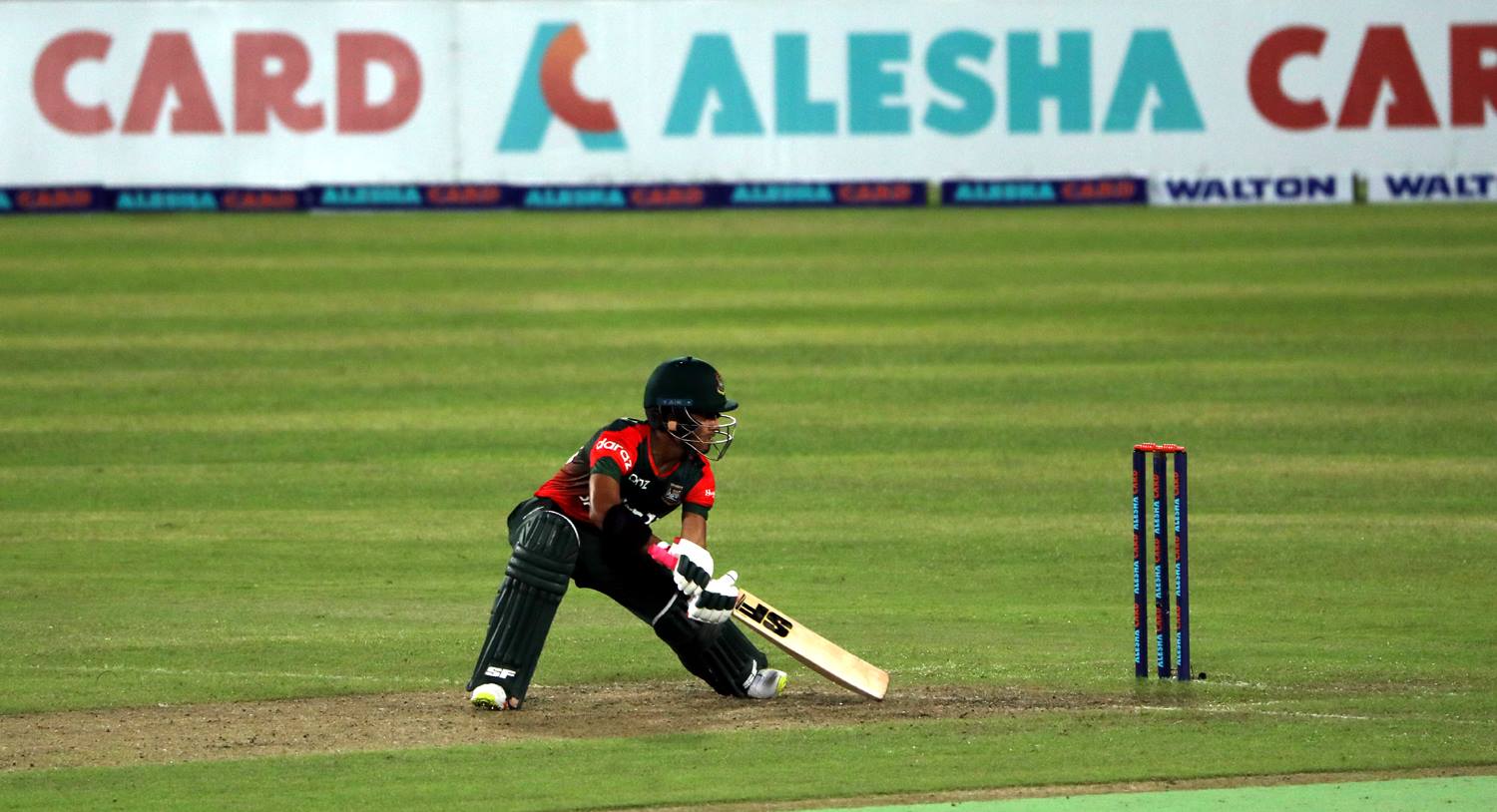 Afif Hossain and Nurul Hasan Sohan's unbroken partnership rescued Bangladesh out of a vulnerable position, ensuring a convincing five-wicket victory over Australia in the second T20I at the Sher-e-Bangla National Stadium in Mirpur Wednesday. Bangladesh now lead the five-match series 2-0.

Bangladesh were reeling at 67 for five after 11.2 overs in pursuit of Australia's modest 121 for seven.

Bangladesh had lost openers Soumya Sarkar and Mohammad Naim early on, but Shakib Al Hasan's 17-ball 26 and Mahedi Hasan's 24-ball 23 kept the Tigers in the game for a while in the middle.

However, Bangladesh were in trouble at one point in the game as Shakib and skipper Mahmudullah Riyad (0 off 4) both fell in the space of six deliveries.

The Tigers' problems were increased when Mahedi threw away his wicket in the 10th over, being stumped off an Adam Zampa delivery by going down the track unnecessarily.

Then Nurul and Afif put on an unbroken 56-run partnership to help Bangladesh cross the finish line with five wickets and eight balls to spare.

During his unbeaten 31-ball 37, Afif was the most impressive, playing brilliant cover drives, pick-up strokes, and pull-shots. During his innings, the young left-hander blasted five fours and a six. While Nurul was not out for 22 off 21 balls.

The visitors repeated the same, as the openers failed to get off to a good start, losing their first wicket in the middle of the third over. Nasum Ahmed caught Alex Carey while attempting to slog over mid-wicket off Mahedi Hasan.

Then Mustafizur grabbed the wicket of Josh Philippe in his very first over, shuffled the batsman to play the on the leg-side before hitting the stumps. He returned scoring 10 off 14 deliveries.

Right-handed batter Mitchell Marsh and Moises Henriques stitched a partnership of 57 runs for the third wicket, however, Shakib broke the well-setted stand as he bowled Henriques, who was looking for quick runs. The batter played a knock of 30 runs in 25 balls including three boundaries and a single six.

Young pacer Shoriful delivered a major blow to the Aussies when he returned Marsh (45) in the 17th over. The batter attempted a swing over long-on but only got an outside edge, which was taken by the wicket-keeper Nurul. Marsh was out on 45 for the second time in two matches.

Mustafizur struck again when he bowled skipper Matthew Wade (4) and returned Ashton Agar (0) who was caught behind in the same over. Following the two straight wickets, Ashton Turner was caught by Mahmudullah off Shoriful in the following over as he tried to cut it over the off side.

In their third encounter on August 6 [Friday], the teams will lock horns at the same venue.

Tags: Bangladesh, Australia
Up Next