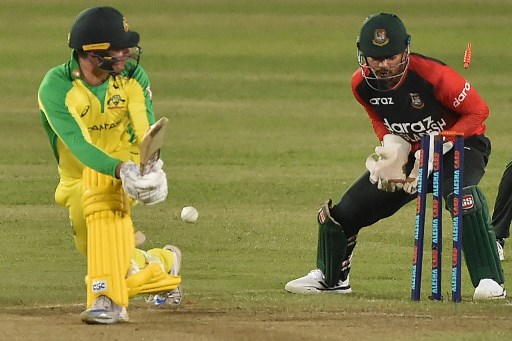 Bangladesh shaped a spin web around Australia to win the first T20I of the five-match series by 23 runs at Mirpur's Sher-e-Bangla National Cricket Stadium Tuesday. Nasum Ahmed was the hero with four wickets.

Bangladesh has never won a T20I match against Australia before, having lost all four prior encounters.

Early in Australia's innings, the Tigers made a game of it, losing three top-order batsmen in the first three overs of their pursuit of Bangladesh's 132 run target.

Bangladesh got off to a flying start as Mehedi Hasan dismissed Alex Carey for a duck with the opening delivery of the innings, a delivery that skidded in. The batsman attempted to play for the turn but was caught off guard by the youngster.

In the second over, Nasum Ahmed was pushed to deep mid-wicket for six, but Josh Phillip decided to come down the track only to find the ball twisting sharply away and being stumped by Nurul Hasan.

Bangladesh then introduced Shakib Al Hasan to the attack in the following over, and it paid off right away, as the Tigers' great all-rounder dismissed Moises Henriques with his first delivery. As the Powerplay came to an end, Mitchell Marsh and Matthew Wade led Australia to 28 for 3.

When Wade hit a Nasum delivery down the leg side straight to man at short fine leg, Australia's fourth wicket fell, and the pressure began to show. Marsh launched his counter-offensive, which worked for a while, but Australia suffered a setback when Ashton Agar was dismissed for a 12-ball 7 off Nasum.

Nasum struck again in the next over, dismissing Marsh for 45 runs on a run-a-ball 45 as Shoriful Islam sprinted in from square-leg to take a good catch.

Mustafizur Rahman, who had bowled economically in previous spells, got Ashton Turner in the second delivery of the 18th over, Mahmudullah got at extra cover.

Shoriful then removed Andrew Tye and Adam Zampa for ducks in the 19th over to finish with figures of 2 for 19 in three overs.

Fizz then snatched Starc's stumps with the final delivery of Australia's innings to secure a 23-run victory.

Bangladesh's batsmen failed to convert their starts, including opener Mohammed Naim, who got out for 30 after hitting two fours and two sixes in his 29-ball knock.

Shakib, who survived two dropped chances on 18 and 23, top-scored with 36 off 33 balls before being bowled by Hazlewood in the 17th over.

Skipper Mahmudullah, who made 20, and Afif Hossain, who scored an unbeaten 23, also contributed to give the total some respect.

Australia, led by Matthew Wade, have brought in their up and coming T20 talent as they are missing key players, including Steve Smith and Aaron Finch who are both injured.