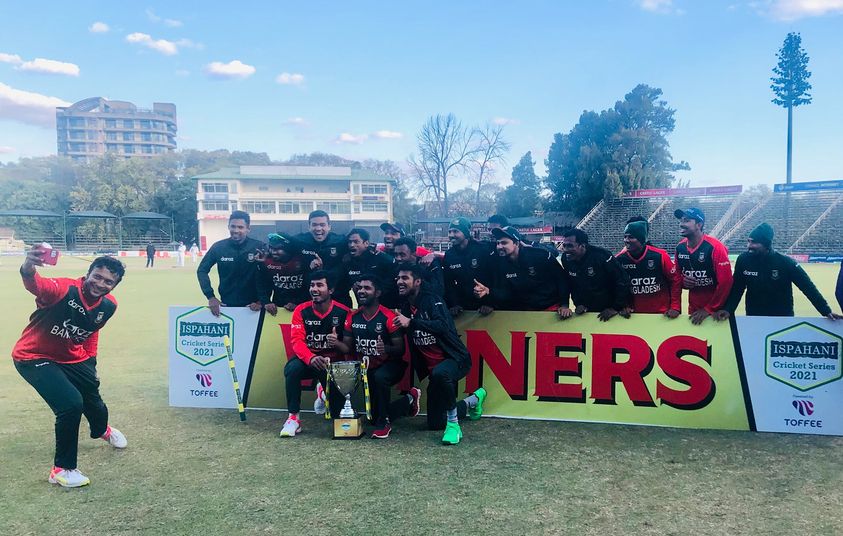 Mahmudullah, Bangladesh's T20I captain, praised his batting unit for completing the second-highest chase in the format and winning the series 2-1 against Zimbabwe.

Bangladesh ended their month-long tour of Zimbabwe on a high note, winning the final game of the series at Harare Sports Club by five wickets while chasing 194 runs.

Before 20 years older Shamim Hossain Patwari seized the moment from the home team with his furious unbeaten 15-ball 31 to push Bangladesh to shore, Shakib al Hasan and Mahmudullah added 25 and 34 to the total.

“The boys showed their character in the middle. The way Soumya and Shakib batted, they tried their best to contribute and in the end Shamim played a crucial knock. So all together it was a good batting unit effort,” said Mahmudullah after the match.

“When you are chasing a big score like 190 plus, you have to get some partnerships and you have to rotate the strike at the same time to keep the dot balls at a minimum. There also should be boundary hit in every over. That was our plan. We tried to build partnerships and get as deep as we can in the chase,” he added.

The left-handed batsman was adjudged Man of the Match in the final game and Man of the Series for his 126 runs in three games, including two half century and three wickets. Mahmudullah also praised the all-rounder.

“Soumya is a useful all-rounder. He got me two wickets when I gave him the ball and tried to restrict the runs. And when the team needed to score runs, he stood in the middle and in the end it was a good batting effort,” Mahmudullah added.

Bangladesh will return home from Zimbabwe soon. For the T20I series against Australia in Dhaka, the members of the T20I squad will check-in straight in the hotel bio-bubble.

Between August 3 and 9, Bangladesh will play Australia in five T20Is. Australia's visitors, who are now touring the Caribbean islands, are due to arrive in Dhaka on Thursday.