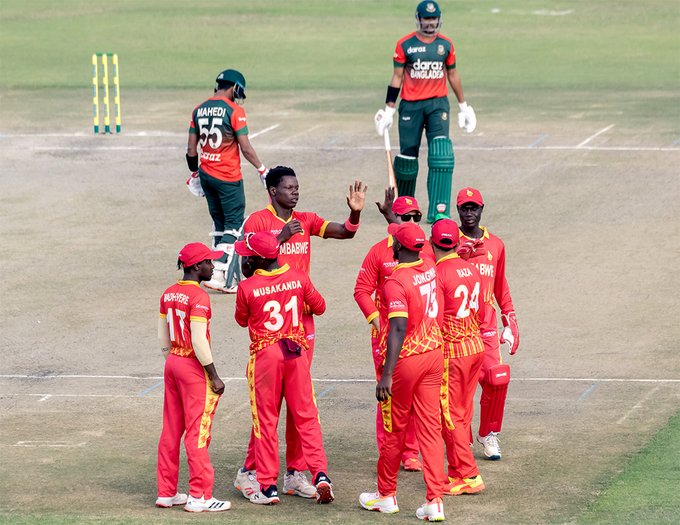 Zimbabwe registered a 23-run victory to level the series against the visitors Bangladesh in the second match of the three-match T20I series at the Harare Sports Ground, Harare.

Bangladesh managed to score 143 runs losing all wickets as the batting top-order collapsed in reply to Zimbabwe’s target of 167 runs.

Bangladesh lost three wickets within the first 50 runs, then skipper Mahmudullah and Mahedi also returned when Bangladesh were on 53.

Opener Mohammad Naim (5) and Soumya Sarkar (8) failed to make a good start as they both were returned by Blessing Muzarabani in the same over.

Shakib Al Hasan and Mahedi Hasan tried to build up a partnership but Wellington Maskadza castled the all-rounder with a catch to Sikandar Raza. Their partnership ended on 28 runs. Following the wicket of Shakib, skipper Mahmudullah (4), Mahedi (15) were returned by Masakadza.

Afif Hossain and Shamim contributed 41 runs in the eighth wicket partnership. Shamim was unfortunately caught by the fielder while playing a long-on shot.

Zimbabwe bowlers Luke Jongwe and Masakadza took three wickets each while Tendai Chatara and Muzarabani took a couple of wickets.

Earlier, Bangladesh got their first wicket when Mahedi bowled Tadiwanashe Marumani (3) during the second over of the game. Then Regis Chakabva and Wessley Madhevere stitched a partnership of 27 runs, before the wicket of Chakabva.

As he fell prey to Shakib al Hasan in the second ball of his first over, the batter scored 14 runs off 9 balls.

Dion Myers joined Madhevere on the crease, they put on a 57-run partnership for third-wicket stand, however, Myers was returned by Shoriful Islam after playing a knock of 26 runs off 21 balls and Madhevere made his third T20I half-century with Myers on the other side.

Zimbabwe skipper Sikandar Raza was run out with a direct hit by Soumya Sarkar when the host scored 122/4. Shoriful picked up his second wicket by removing Madhevere, the highest run-scorer of their innings, who scored 73 runs in 57 balls smashing five fours and three sixes.

Batter Ryan Burl (34 off 19) played an excellent cameo towards the end to take his team's total of 166 runs. Shoriful bagged another wicket by getting Luke Jongwe caught by Shakib at the deep square on the last ball of the innings

Bangladesh won the first match of the three-match series by 8 wickets. The third ODI would be a series decider which will be played on July 25.