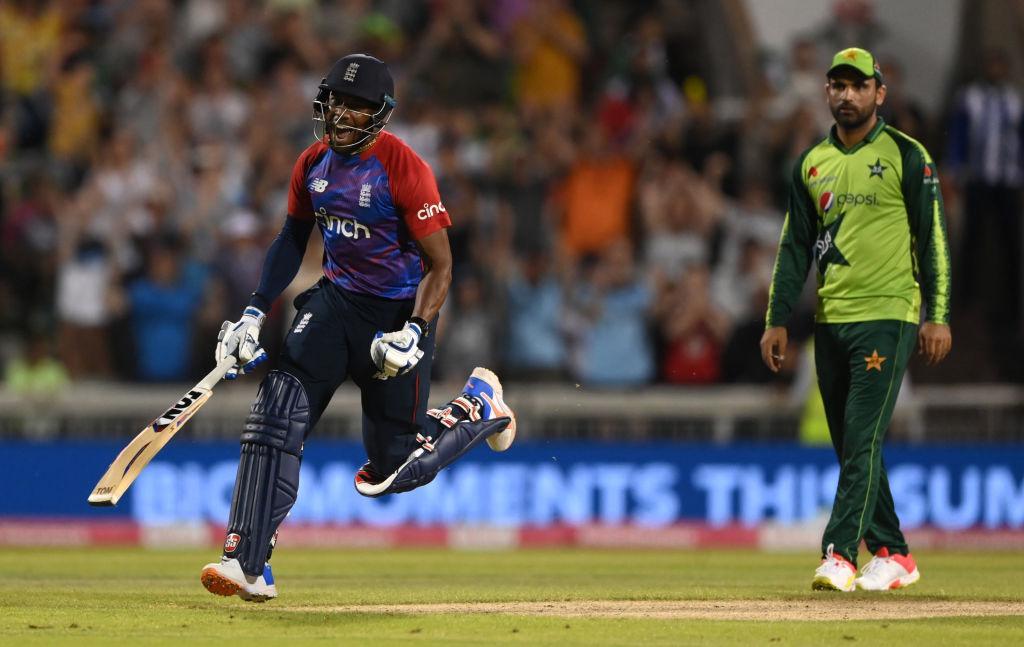 Adil Rashid took a career-best haul before England just did enough in a nervous chase to wrap up their white-ball home season with a thrilling three-wicket win over Pakistan in a Twenty20 decider at Old Trafford on Tuesday.

Leg-spinner Rashid took 4-35 as Pakistan were restricted to 154-6 after winning the toss, with Mohammad Rizwan batting through the innings for 76 not out.

England opener Jason Roy, the player of the match, got the chase off to a brisk start with a dashing 64.

But the hosts kept losing wickets before returning captain Eoin Morgan made a useful 21.

Liam Livingstone, the player of the series after scoring England's fastest T20 hundred in the opener at Trent Bridge, struck one six and then holed out before Chris Jordan struck the winning runs in the last over.

Fellow opener Jos Buttler was well caught in the deep by Pakistan captain Babar Azam off leg-spinner Shadab Khan for a scratchy 21.

Roy, by contrast completed a 30-ball fifty but on 64 he skied a catch off Usman Qadir, a leg-spinner like his father, the outstanding Abdul Qadir.

Jonny Bairstow holed out cheaply off left-arm spinner Imad Wasim and when Moeen Ali was bowled charging at off-spinner Mohammad Hafeez for just one, England were 112-4 off 15 overs.

But with Morgan hitting a couple of fours off Hafeez, England were 126-4 off 17 overs.

Azam, rather than continue with spin, recalled paceman Hasan Ali into the attack.

But left-hander Morgan hoisted him for two sixes separated by three dot balls.

But when Hafeez bowled Dawid Malan for 31, England still needed 12 to win off eight balls.

Liam Livingstone, however, responded by hoisting his first ball for six only to be caught next ball, with England needing six off the last over.

Livingstone and Morgan then got out in quick succession before a pair of hard-run twos from Jordan ended the match.

Spin proved Pakistan's undoing for the second match in a row, with off-spinner Moeen taking 1-19 from his four overs in addition to Rashid's haul.

Rashid took the first three wickets to fall, a haul that included having Azam stumped for just 11 by wicketkeeper Buttler when the star batsman misread a googly.

Moeen crowned a spell where he did not concede a boundary by having Fakhar Zaman lbw for 24.

Rashid took a wicket with his last delivery when Shadab Khan holed out, with Rizwan not seeing enough of the strike after completing a 38-ball fifty featuring two sixes.