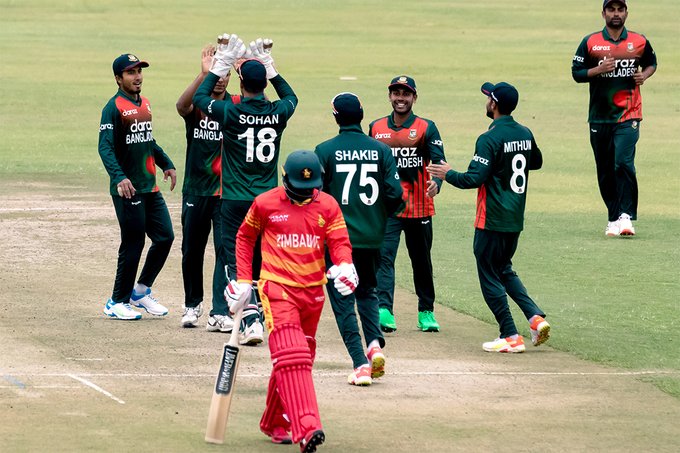 When Zimbabwe bowled first, the host team gave up the advantage of having Bangladesh pinned at 76 for 4 and suffered another batting collapse.

To get past former captain Mashrafe Mortaza, Shakib took the crucial wicket of Brendan Taylor, the Zimbabwean skipper, who was playing his 200th ODI. He completed with his second five-wicket haul in one-day international cricket.

In 14.4 overs, Zimbabwe went from 78 for 3 to all out for 121 runs. Taskin Ahmed sent Wesley Madhevere's middle-stump collapsing after debutant Tadiwanashe Marumani dragged a Mohammad Saifuddin delivery on to his leg-stump in the second over, reducing Zimbabwe to 13-2 in the fifth over.

Dion Myers, Zimbabwe's other debutant, looked promising with his three boundaries, but he got stuck at the deep square-leg fence after top-edging a pull off Shoriful Islam.

Then came Shakib's big moment, when he passed Mortaza as Bangladesh's all-time leading wicket-taker in one-day internationals. In the 15th over, he had Brendan Taylor, the Zimbabwean captain, top-edging a sweep and being caught comfortably by Taskin Ahmed at short fine-leg.

Timycen Maruma was unavailable for Zimbabwe after sustaining an injury while fielding a ball in Bangladesh's 35th over. Later, he was carried to the hospital in an ambulance that pulled up to the fence.

Liton led the way with a 102-run innings off 114 deliveries, including eight boundaries. Bangladesh's big total set after being sent to bat first was built up by Liton's ton. It was his first fifty after eight innings.

In the middle order, Mahmudullah, Afif Hossian, and Mehedi Hasan Miraz scored 33, 45, and 26 runs, respectively, to help the Tigers pass the 270-run milestone.

Tigers skipper Tamim Iqbal (0) was caught by the wicketkeeper during the first ball of the third over. Shakib was later dismissed after scoring 19 runs off 25 deliveries while attempting to play a cut shot and being caught at cover point.

The next ODI will be played on 18th at the same vanue.