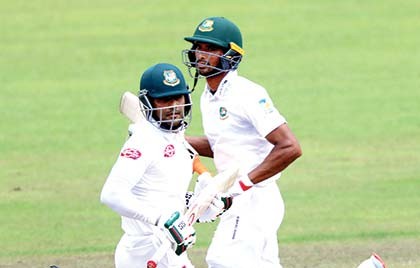 Bangladesh opening batsman Imrul Kayes in an interview with Cricfrenzy on Monday [July 12] expressed his thoughts about all-rounder Mahmudullah Riyad’s decision to retire from Test cricket.

Mahmudullah, who returned to Test cricket after 17 long months, scored 150 runs in the first innings against Zimbabwe. He announced his retirement in a startling way, stunning the Bangladesh cricket fraternity.

“It's a surprise for everyone.  As a cricketer, I would like to say that I support the decision of the Riyad Bhai. I appreciate it because only a player knows when he should step down.  Maybe he decided to focus more on short format cricket to play better.  He has made this decision to stay fit in the World Cup.  I totally appreciate his decision,” said Imrul.

Imrul believes the 35 years older's decision to retire from Test cricket could benefit the country’s cricket as he said a young cricketer will get a chance to play in his place.

“When such an experienced cricketer leaves the place, it is difficult to fill the gap.  On the other hand, I would like to thank the Riyad bhai for giving another young player a chance in his place.  If he had played more, the other players might not have got a chance.  So the young player will get a chance to play in that place for 2 years.  So I would say that it is very good for Bangladesh cricket,” he said.

The ‘Silent Killer’ received a guard of honor from his teammates on the last day. This is the first time any cricketer from Bangladesh team has received this kind of gesture. Imrul considers Mahmudullah lucky. He also said that every player wants to leave the field like this.

“I personally think every cricketer should have the privilege when they leave the field.  So he is very lucky to have left the field proudly.  When he takes retirement from his career, that's how he can end his career. Every player wants to leave the field like that,” he added.

Tags: Mahmudullah
Up Next