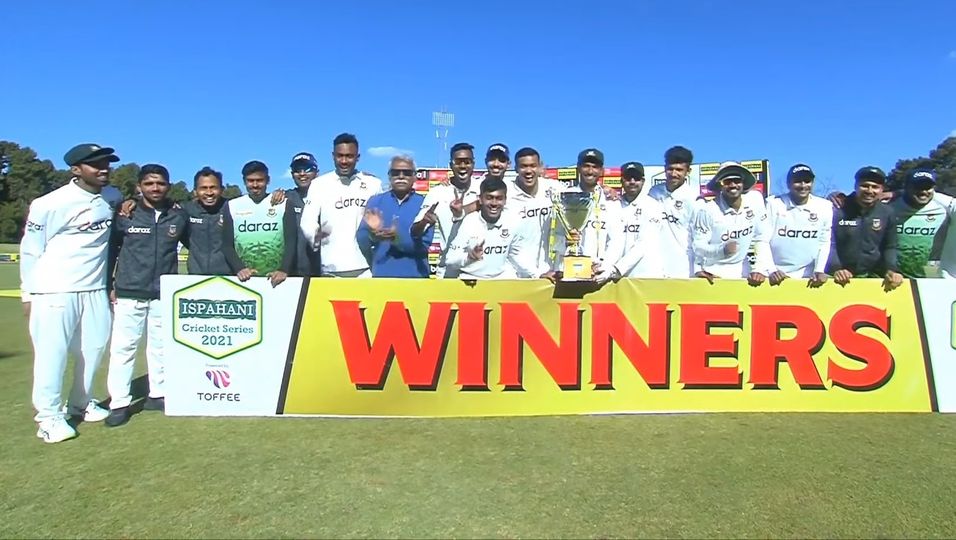 Bangladesh put together a strong performance in the one-off Test against Zimbabwe, winning by 220 runs. Bangladesh, needing seven wickets on the final day, overcame multiple fielding errors and found heroes in Taskin Ahmed (4-82 ) and Mehidy Hasan ( 4-66) to complete the task. A comfortable victory on the player of the match Mahmudullah's final Test.

At the beginning of the last day, Bangladesh cricketers formed a line and gave a guard of honor as Mahmudullah stepped onto the pitch. The event was for the sudden retirement of the veteran, confirmed by the live broadcast commentators.

Earlier, the opening hour of play gave Zimbabwe optimism, when Dion Myers and Donald Tiripano, the two overnight batsmen, escaped with their lives. During that time, the two benefited from good fortune as Bangladesh lost three catches, but that luck ran out soon after the drinks break as Bangladesh stormed back.

In the first ball after the interval, Mehidy had the resolute Myers chipping gently to short midwicket, putting an end to Tiripano's 119-ball resistance. Timycen Maruma was stranded plumb in front for a duck two balls later, and Zimbabwe was unsettled.

The hosts had hoped to continue the fight started by Myers and Tiripano when they stretched their nightly vigil into an unblemished first hour until that happened. Bangladesh, on the other hand, tightened the screws after that double break.

Taskin, on the other hand, bowled at a good pace against batsmen with attacking lengths in the lower order. Soon after Mehidy's strikes, he had Roy Kaia LBW to the full ball. In his following over, he proceeded to uproot Regis Chakabva's stumps. Zimbabwe had dropped from 159/3 to 164/7.

It could have gone even worse as Taskin also bowled Victor Nyauchi, only for replays to show that the bowler had overstepped.

In the last session, only three wickets were required. If it hadn't been for two more lost catches, this time by Shakib Al Hasan, Bangladesh could have closed things up fast. This prolonged their wait for victory as Tiripano stitched together a 92-ball stand with Nyauchi for the 8th wicket and another 86-ball stand with Blessing Muzarabani for the 9th wicket. In the process, he helped himself to a deserving half-century.

Ebadot Hossain got one to cut in sharply and take an inside edge through to the keeper, ending Tiripano's resistance. He was the 9th wicket to lose. An exciting final wicket stand came to an end when Mehidy bowled the last man, Richard Ngarava, to give Bangladesh a thrilling victory.\

This triumph came after the last five games in this format. The previous victory was by an innings and 106 runs against the same opponents in Dhaka.