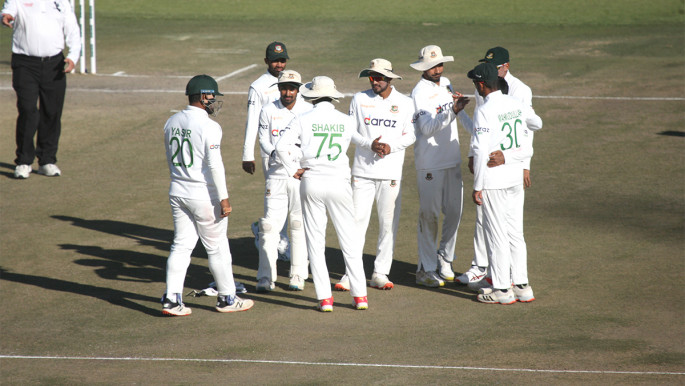 Bangladesh is comfortably in control of the one-off Test match against Zimbabwe in Harare. They'll need seven wickets on the fifth day to win their first away Test in four years.

In the one-off Test match in Harare, Bangladesh set an implausible goal of 477 for hosts Zimbabwe, thanks to centuries from Shadman Islam and Najmul Hossain Shanto in Bangladesh's second innings.

Zimbabwe finished the day with a score of 140 for three. The Bangladeshi bowling was onslaught by skipper Brendan Taylor, who was removed for a quick 92 off 73 balls.

To win, the hosts will need 337 runs. Taskin Ahmed, Mehidy Hasan Miraz, and Shakib Al Hasan each took one wicket.

Earlier, Bangladesh declared on 284 for 1 in their second innings, leaving Zimbabwe to chase a mammoth target. Shanto and Shadman both hit centuries.

Bangladesh has grabbed complete control of the game, with the help of Shadman's maiden Test century and Shanto's second century in three innings.

Shanto blasted six sixes in his 118-ball 117, breaking the Zimbabwean record for most sixes in a Test innings, while Shadman hit nine fours in his 115 off 196 balls.

The pair amassed 196 runs for the second wicket, surpassing Habibul Bashar and Javed Omar's performance at Chattogram in 2001 as Bangladesh's highest second-wicket stand against Zimbabwe.