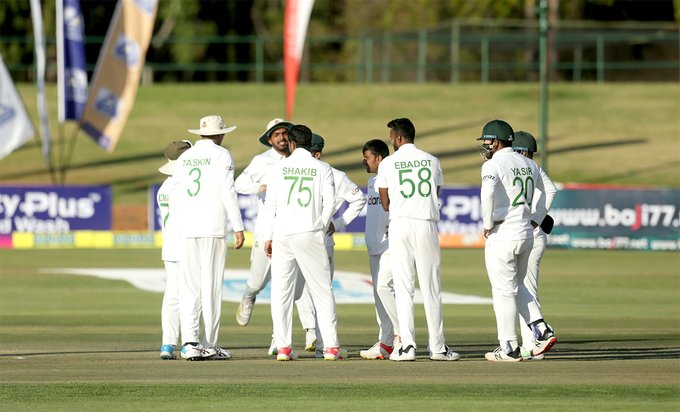 On the third afternoon, Mehidy Hasan Miraz and Shakib Al Hasan guided Bangladesh a commanding position as Zimbabwe collapsed in the one-off Test in Harare. Shakib brought up four wickets to go with Miraz's eighth five-for. It was only the third time in Zimbabwe that spinners claimed nine wickets in one innings.

Shadman Islam and Saif, Bangladesh's openers, were unbeaten on 22 and 20 respectively in the second innings. Bangladesh now has a 237-point lead.

Earlier, after being securely situated at 225 for 2 at one point, the home team lost their last eight wickets for 51 runs. At the same time, Takudzwanashe Kaitano top-scored with 87 from 311 balls, batting brilliantly at the other end.

It's the third-most amount of balls faced by a Zimbabwean debutant overall, and the highest score by a Zimbabwean opener on debut. Brendan Taylor made 81 but his dismissal ultimately changed the home side's outlook.

The scoring rate dropped significantly after Taylor left for a 92-ball 81. Dion Myers and Kaitano batted for more than 20 overs and kept Bangladesh at bay after lunch, but the strategy ultimately proved to be Zimbabwe's undoing.

Shakib struck again, dismissing Timycen Maruma for a 17-ball duck, and Taskin Ahmed had Roy Kaia inside-edging one to the keeper soon after. Zimbabwe scored only 35 runs in 29 overs in the second session, with Kaitano staring helplessly from one end. In the final session, Miraz took command.